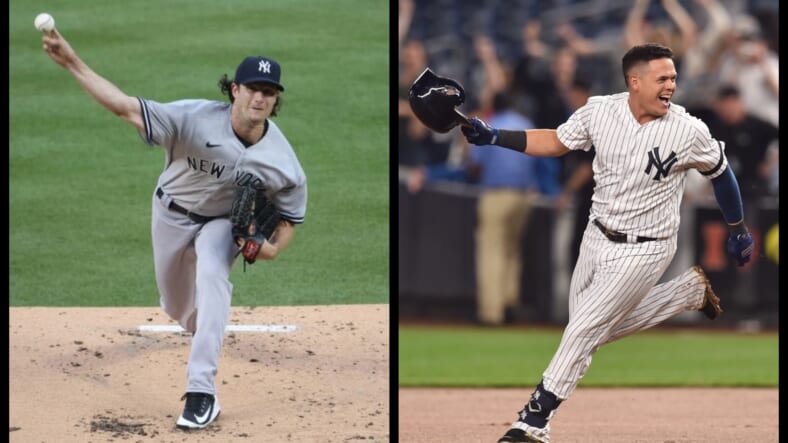 The New York YankeesÂ announced on Thursday that four players have been nominated for the 2020 All-MLB Team. Fans have through November 13th to vote for players on the MLB.com website. Here are the four Yankee nominees:

Cole teamed up with back-up catcher Kyle Higashioka for the final four starts of the season, and had a 1.00 ERA with Higashioka behind the dish. It’s likely Cole and Higashioka will frequently be teaming up in 2021 and beyond, assuming Higashioka remains the back-up.

To nobody’s surprise, DJ LeMahieu had another stellar season for the Yankees. He won the batting title with a .364 average, hit 10 home runs and drove in 27. His OPS was a spectacular 1.011 with a 177 OPS+.Â LeMahieu did all that and totaled a 2.8 WAR despite a stint on the IL.

After two great seasons in The Bronx, LeMahieu is now a free-agent, with the Yankees hoping to retain him for next year and beyond.

Voit had a breakout season with the Yankees, proving that he deserves to be the first-baseman of the future. Batting .277, Voit lead baseball with 22 home runs and was fourth in RBI with 52. He added a .948 OPS with a 156 OPS+.

Voit battled a foot injury all season, but managed to be one of the few Yankees to stay off the IL all season. Now that the season is over, he can rest and get his foot ready for the spring.

Additionally, Urshela’s 0.7 dWAR is good enough to be an AL Gold Glove award candidate at third-base. He will be looking to win his first Gold Glove despite his stellar defense all throughout his career.