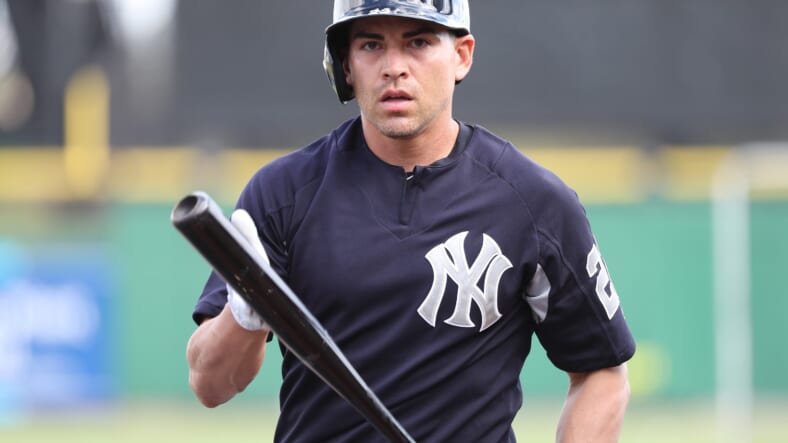 Jacoby Ellsbury just will not go away. The former Yankee & atrocious signee is once more in the news, though this time, it’s for a good reason. Yesterday the BBWAA released their 2023 Hall of Fame ballot, and it featured numerous first-timers on the list. One of which, somehow, was Jacoby Ellsbury.

In this piece, I am going to dive into how borderline insulting it is that he was somehow named to the list of finalists. There is legitimately no world in which Ellsbury deserves to be named amongst some of the greatest players to ever play the game of baseball. If anything, it’s a bit insulting to the HOF to see someone so average be honored with this chance.

Ellsbury isn’t even close to the benchmarks for Hall of Famers:

Now, for starters, let’s just dive into the WAR benchmark that has been established for HOFers for some time now. According to MLB, the average WAR needed to get into the Hall usually begins anywhere from 50 WAR and upwards. It only makes sense to look at the best of the best, and using Wins Above Replacement, one of the best-telling statistics, is a great way to do so. Take Joe Mauer, for instance. One of the best catchers of the 2000s and early 2010s. Barely eclipsed that 50.0 mark, with a career total of 53.0 fWAR. Mauer was absolutely dominant at the Catcher position for a few years, and his MVP season helped solidify — in my opinion — a Hall of Fame career for the Minnesota legend. He barely passed that benchmark, and many people give him the nod because of all that he accomplished whilst doing it for one organization. Ellsbury, on the other hand, has a career total of 30.0 fWAR. He isn’t even close to the benchmark, and players like Trea Turner have already accumulated more fWAR than he (31.6).

Ellsbury wasn’t a bad player, I’m not saying he was. I am saying he shouldn’t be anywhere near this ballot, nor any ballot in the future. He played 11 years in the majors, even though his last few years with the Yankees were absolutely horrendous. He had one single season over 5.0 fWAR, and that was his remarkable 2011 year, in which he posted a 9.6 fWAR. Yet, outside of that season, Ellsbury really wasn’t anything special. Many remember when the Yankees gave him that mammoth 7-year deal worth $150 million. Yet, many also remember how Jacoby Ellsbury completely disappeared and quit on the organization toward the end of his career.

Ellsbury’s Yankee tenure was about as disappointing as it gets:

In the four seasons he spent with the Yankees, the best was easily his inaugural year in pinstripes, 2014, as that year he clubbed 16 HR, stole 39 bags, posted a 109 wRC+, and accumulated 3.6 fWAR. If one were to use that season to have predicted how his Yankee tenure went, Ellsbury would’ve been a damn solid signing. Instead, that wasn’t even close to happening. Ellsbury fell off a cliff the next three years before the organization, and he ultimately terminated their deal, and the team released him. In the 2015-2017 seasons, Ellsbury earned a total of roughly $64 million and only racked up 4.3 fWAR. He was plagued with injuries, and oftentimes the organization didn’t even know what he was dealing with. He would post wRC+‘s of 83, 90, and 102 in those final seasons before the team felt it was best that they went their separate ways.

In Nov. 2019, the Yankees released Ellsbury and withheld the $26 million remaining on his contract, claiming he used an outside rehab facility without their permission. The $26 million covered Ellsbury’s salary in 2020, the final guaranteed season on his seven-year free-agent contract, as well as a buyout of his 2021 club option. The MLBPA filed a grievance on Ellsbury’s behalf. He eventually underwent surgery to repair a torn hip labrum in 2018, and his recovery from the procedure is what led to the contract dispute between he and the organization. It left an extremely bitter taste in Yankees’ brass’ mouth, as well as the fans.’ No Yankee fan wants anything to do with Ellsbury, and for right reason, but what a fall from grace it was.

I remember when he signed with the team, I felt like it was certainly an overpay, but I believed he was going to be an integral table-setter for the squad. Sadly, none of that was to be true, as Ellsbury would only suit up twice for near-full seasons worth of play (149 games in ‘14, 148 games in ‘17). His Yankee tenure completely tanked his career and forced him to retire due to injuries down the road. He would go ahead, and post-career worsts in every category, including K%, and his Yankee OPS of .716 through those four years. He was a colossal letdown and disappointment, and somehow, he is now being honored as a ballot member for the ‘23 HOF Class.

He won’t get voted in, but he shouldn’t be on the list, to begin with:

While Ellsbury certainly won’t get elected, nor should he receive any votes, it is more about the principle than the actual result. For the class filled with the greatest of all time, the best of the best, to somehow have dropped off this heavily is somewhat sad to see. Ellsbury has no place being named with other first-time Ballot features like Carlos Beltran, Francisco Rodríguez (K-Rod), Huston Street, and even Jayson Werth. I personally don’t think Werth should be on this list either, but at least his career wRC+ is better than “slightly above average,” as it sat at 120. He also played more years in the league, accomplished as much as Ellsbury — more in some facets, and played until he was 38 years old. The Hall of Fame is supposed to be reserved to the best to ever step in the league, as it’s not called the Hall of Pretty Decent. Ellsbury being named is a joke, and I certainly hope this isn’t the theme that continues in the near future.

I also don’t even know how Ellsbury was allowed to be listed, as his contract with the organization ended in 2021, thanks to a buyout by the club. He made $26 million in the 2020 season, despite not having suited up for the team in 3 seasons. His injuries certainly ruined the back half of his career, as unfortunate as it was, but Ellsbury also refused to update the organization with what type of injury he was dealing with and where he was receiving his treatment for said injury. He handled everything extremely poorly, and the relationship between he and the Yankees will never be repaired. However, he did it to himself, and his reluctance to be open and honest about it led to the massive dispute between the league and he, which saw the MLBPA get involved. Ellsbury ruined his legacy and quickly shot up the charts of least-liked Yankee.

Him being named to the HOF ‘23 ballot is more amusing than anything, though it also is a bit upsetting. A career .760 OPS hitter and he posted a season over .800 OPS only twice (his rookie year in a shortened sample and that 2011 year). He was a one-time All-Star, 2X WS champion (both with Boston), and he stole 343 bases in his 11-year career. None of those should equate to “Hall of Fame” level, but here we are. Hopefully, the voters do right by the truth of what it means to be a Hall of Famer, and that would mean Ellsbury shouldn’t get a single vote from the writers. I oftentimes don’t side with the writers that are responsible for voting, as many of them hate the steroid users (like ARod, Bonds, etc.) and will never give them their flowers.

If Ellsbury receives less than 5% of votes, he will be dropped from the ballot, so I suppose this is nothing more than a reactionary post about it. However, if, by God’s grace, he finds himself getting more than that benchmark, the voters should be ashamed of themselves. For all the pain and heartbreak he caused the Yanks fan base, I wouldn’t even be mad if they came out and said, “oh, that was a typo. Ellsbury was not named a finalist”. It would make more sense than this, as who would’ve thought that being a bang-average player that benefitted from a great situation in Boston would find himself in a category amongst the best players in the world? The voting for the 2023 ballot is in January, and it’ll be quite the group we see honored.