While thereâ€™s still a month to go before Opening Day, some early takeaways from the Yankees spring so far. 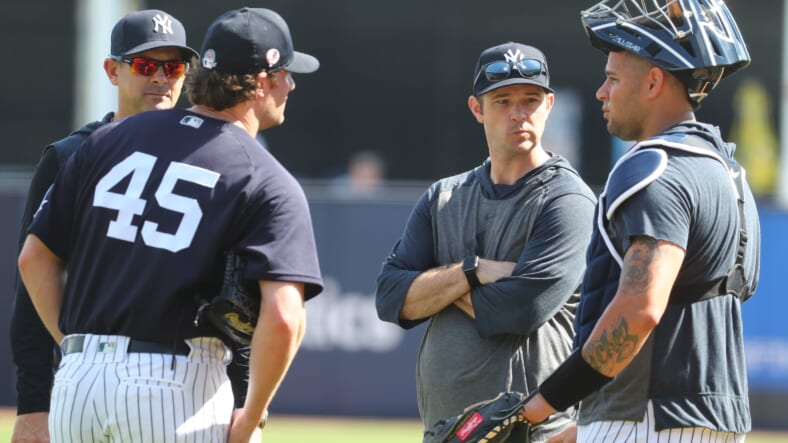 The Yankees are currently 0-2, but itâ€™s still Spring Training. The record wonâ€™t count against the Yanks come to Opening Day, so no one needs to panic… yet. While weâ€™re still young in the Spring Training schedule, here are some early storylines to watch as scrimmage play continues.

Andujar Off to Hot Start He Needs

As I repeatedly stressed, the battle for third base is far from decided. What Urshela and Andujar do this spring will determine who our opening day third baseman is. Urshela is currently hitless. Andujar has only one hit, but itâ€™s a home run. Iâ€™ve continually stressed that Urshela needs to show last year wasnâ€™t a fluke offensively if he wants playing time. And if Andujar can show even a 20% improvement defensively from 2018, while outhitting Urshela, itâ€™ll be a tough call to justify keeping Urshela as the opening day starter at third.

The Yankees will need to get creative to fill the void between now and June when weâ€™ll get German and Paxton back. While I still believe it was a mistake hanging on to JA Happ, his 2 scoreless innings with 3 Kâ€™s is helping to feed some optimism.

I donâ€™t want to think about another season without Luis Severino, but it seems likely to happen. So, with both Cessa and Loaisiga looking strong in their innings of work, itâ€™s hopeful to think one of them will leap up to be a viable, long term, option in the rotation.

The Injury Bug is Back Again

The Yankees were besieged by injuries last season. How they managed to pull off over 100 wins is still impressive by all stretches of the imagination. But it would appear that the injury bug is back.

Judge, Paxton, Severino. These are three names we did not want to see experiencing any kind of pain/injury before scrimmage play began. Judge’s shoulder seems to be healing. He has been able to start throwing, and is starting to hit. If he experienced no further discomfort, weâ€™ll see him in right soon enough.

Word is still inconclusive about how long Severino will be out, or just how bad the problem in his forearm/elbow is. The perplexing dilemma about Sevy is the discomfort is coming when he throws his changeup, not his fast OR curveball. Hopefully, weâ€™ll start March with some good news.

Paxton may be able to rehab early enough in the year to return by May. Should Paxtonâ€™s recovery be that fast, coupled with German coming back by June, the Yankees are poised to have a lethal and very fresh rotation down the stretch in September?

Recaps will continue every Monday, as performances, storylines, and news develop for the start of the Yankees 2020 season.