Do the Yankees have a Gerrit Cole problem? 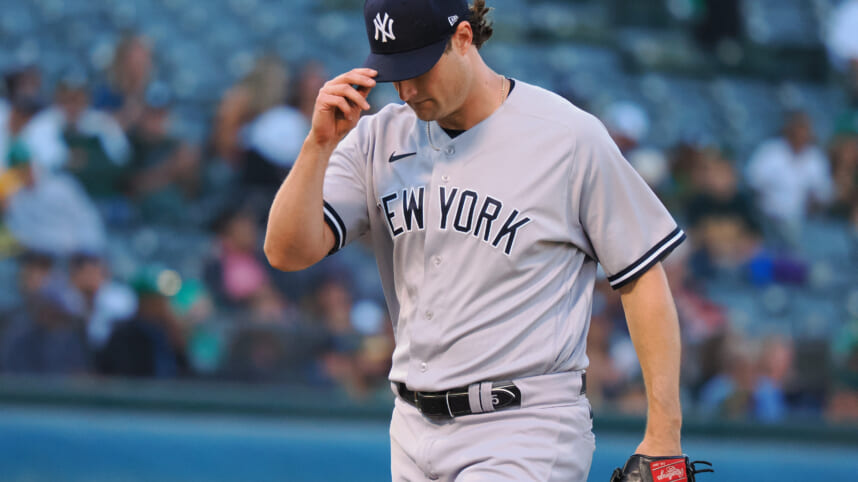 The New York Yankees need the best version of starting pitcher Gerrit Cole during the playoffs, and with only about two weeks left in the regular season, Cole doesn’t have many opportunities to get out of his current funk.

It seems as if every time Cole takes the mound, he gives up a home run, a statistic that has plagued him at the worst moments. Despite being an extremely effective pitcher and contact-hitting teams struggling against him, he has a knack for giving up long balls at inopportune times.

Take Friday, night for example, when he gave up a 1st inning solo shot to Tommy Pham and a three-run shot to Alex Verdugo in the 6th inning. While Cole believes he struck out Verdugo on the pitch before, his emotions ran high, and he gave him a meatball to send flying over the centerfield wall.

In fact, Cole has now given up a home run in six consecutive games, allowing 10 in his last six starts. He currently hosts a 4.94 ERA in the month of September after recording a 3.20 ERA in August.

By most accounts, he doesn’t look like a premier ace at this point in time, so he will have to take things to another level when the postseason eventually begins.

What is causing Gerrit Cole’s latest struggles for the Yankees?

Looking at his specific pitch selection, Cole heavily utilizes a 4-seam fastball, slider, curveball, change-up, and occasionally throws in a cutter. His fastball usage has increased this season to over 50% after hovering around 47% in 2021. It is generating a .218 batting average against with a 29.4% whiff rate and 25.2% put-away rate. However, Cole’s best pitch is by far his slider, producing a .158 BA, 44.2% whiff rate, and 25.7% put-away rate.

However, Cole struggles considerably, giving up home runs with his fastball, allowing 16 this year and six in the month of September alone. Opposing batters are hitting his fastball at .265 with a .694 slugging rate. Seemingly, his fastball efficiency has dipped this month after showcasing a bit more consistency in August, allowing a .222 average.

Of course, the Yankees expect Cole to be consistent with his pitches in the playoffs, but he must experience at least one game without giving up a homer in the near future. If he continues to allow long balls at this rate, the Yankees will have to produce runs in the playoffs, which is needless to say. However, for a starter earning over $30 million per season, I’m not 100% convinced he can get the job done at this very moment.