Did the Yankees just stumble upon their future shortstop? 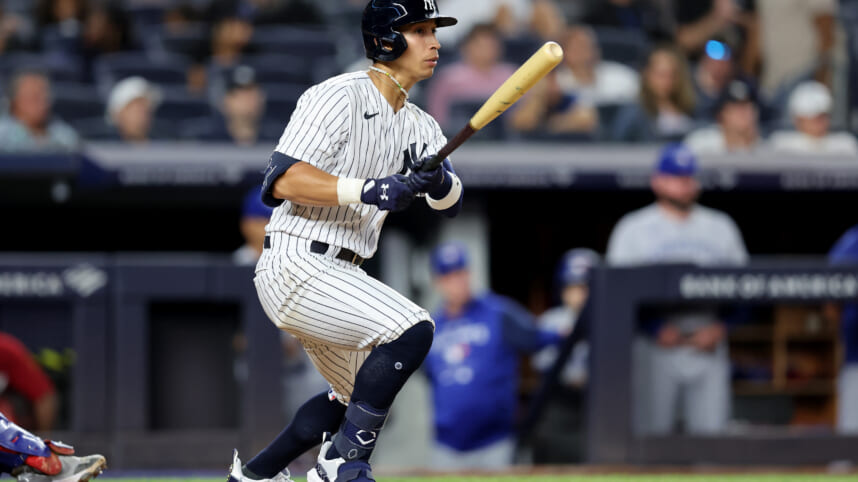 The New York Yankees started off the 2022 season operating at high-level. Calm, cool, and collected. However, they’ve barrelled through games without a sense of discipline ever since the All-Star break, losing their coveted double-digit cushion in the AL-East.

Manager Aaron Boone has been trying to shake things up the past few days, calling up Estevan Florial and Oswaldo Cabrera to offer more support in both the outfield and infield. Florial has been starting in centerfield over Aaron Hicks, but he’s been unable to record a hit this season despite dominating in Triple-A.

The bigger surprise was Cabrera, who’s been electric with Scranton-Wilkes/Barre this season. However, most believe that Oswald Peraza would be the first option called up. Instead, Cabrera has been showcasing some impressive capabilities at the MLB-level over a two-game sample size.

The Yankees are liking what they’re seeing from Cabrera:

In his first game, Cabrera failed to get on base but made solid contact on a number of occasions, including in his first at-bat, which just barely fell short of the outfield wall. It took him one game to get acclimated to major league pitching, recording two hits: a double to deep right centerfield and a single to right field over four at-bats. Clearly, he’s more than capable of continuing his dominance at the highest level.

The Yankees had no choice but to elevate him given those incredible numbers, but they’ve also utilized him defensively, once at third base over Josh Donaldson and at shortstop on Thursday night over Isiah Kiner-Falefa.

Cabrera struggled at third base but showcased perfect defensive capabilities at SS. He easily gobbled up routine plays and made a few difficult ones to put his talents on display. In fact, he looked a lot more comfortable than IKF at times.

There is concern that Cabrera doesn’t have the arm strength to manage shortstop at the MLB level, especially if he’s stretched off platform. He’s played the majority of his reps in the minor-league level at second base, where he doesn’t need as much power behind his throws and can easily convert.

Nonetheless, he looked so good at shortstop on Thursday that I wouldn’t be surprised if the Yankees give him more reps of the position, despite their outward confidence in IKF.

This season, Kiner-Falefa hosts a .267 average with a 31.6% on-base rate, 14% strikeout rate, and one homer over 107 games. Defensively, he features a .970 fielding percentage with 11 errors over 910 innings. His numbers aren’t bad on paper, but Anthony Rizzo at first base has scooped up one too many balls out of the dirt. He does feature a +6 defensive runs saved above average, which indicates he’s been a positive influence at the position.

However, if the Yankees feel as though Cabrera can offer similar defensive quality, they should consider giving him more reps based on his offensive contributions and power.