Could the Yankees make a big shortstop position change for the playoffs? 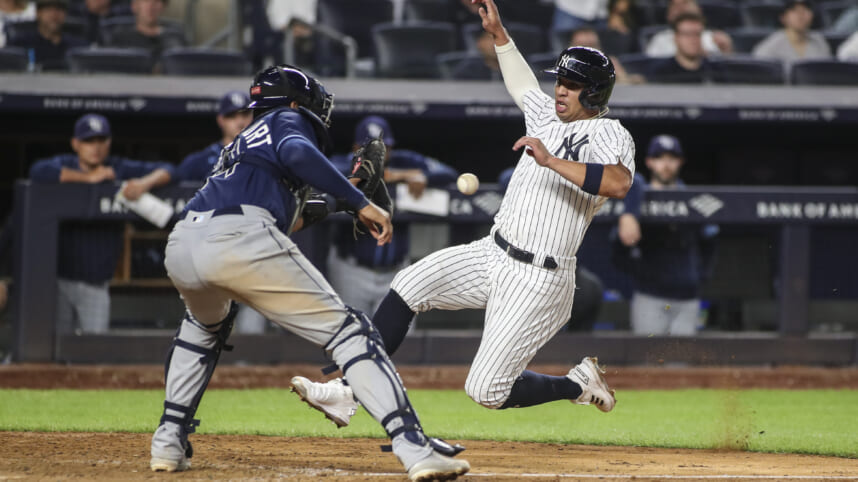 The New York Yankees have just one game remaining in the regular season, facing off against the Texas Rangers on Wednesday before patiently waiting for the ALDS.

Management has a few tough decisions to make regarding the postseason roster and who will feature in the first round. However, there’s an argument to be made that rookie Oswald Peraza should be on the roster and should be earning playing time.

There is concern with Isiah Kiner-Falefa‘s defense, despite picking things up tremendously in the batter’s box in the month of September. However, Peraza has been electric since being called up on September 2 against the Tampa Bay Rays. He hit .313 with a 40.5% on-base rate in September and has started off October on a hot streak.

The Yankees have been pleasantly surprised by Oswald Peraza’s production:

On the season, Peraza has only played in 17 games, but he’s hitting .319 with a 39.6% on-base rate, one homer, seven runs, and two RBIs. He’s only striking out at 15.1% with a 7.5% walk rate, showcasing solid patience in the batter’s box and delivering in big moments. Seemingly, Peraza and Oswaldo Cabrera, the team’s two rookies on the field, look like veterans at this point in the season.

However, Peraza isn’t necessarily known for his offense, he’s known for his quality defensive production. Kiner-Falefa has started at shortstop all season long, hosting a .970 fielding percentage with 15 errors and 10 defensive runs saved above average. The metrics say he’s looked solid this year at the position, but he has botched far too many routine ground balls, something that may plague the Yankees when it matters most in the postseason.

It is unlikely the Yankees start Peraza over IKF in the playoffs, but at the very least, there’s an argument that he should be getting some playing time, or at least on the roster, to begin with. Defensively, Peraza has a perfect fielding position at second base and shortstop for the Yankees over 81 innings (at SS).

Some are extremely frustrated that Peraza didn’t get more playing time during the regular season, building a sample size that might’ve justified swapping him in over IKF. Nonetheless, with IKF looking far better offensively the past few weeks, hitting .273 with a 34.1% on-base rate in September, the team is a bit more comfortable with him than an inexperienced rookie.

Oswaldo Cabrera will end up representing the Yankees youth in the playoffs, starting in left field with Andrew Benintendi still nursing a wrist injury.