Could the New York Yankees explore an Aroldis Chapman trade? 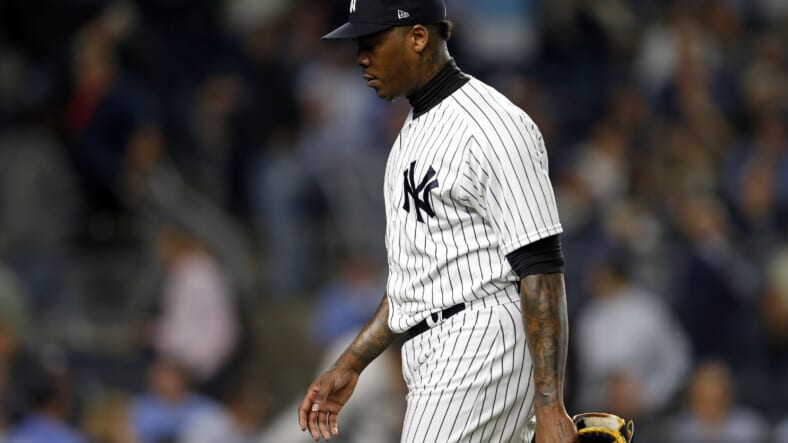 There is no question that New York Yankees closer Aroldis Chapman is one of the best in baseball, but he has been a problem postseason.

In two consecutive years, Chapman has given up home runs to knock the Yankees out of the postseason. Last year it was against Jose Altuve, who launch a curveball into the bleachers, sending the Houston Astros to the World Series. This year, Raysâ€™ Michael Brosseau received his revenge on Chapman, hitting a ninth-inning home run that ended the Bombersâ€™ hopes of progressing.

While Chapman finished the 2020 regular season with a 3.09 ERA and three saves, his postseason numbers werenâ€™t as convincing. In two games against the Rays, he allowed a 3.38 ERA and one home run, which cost the Yankees the series.

TOP ARTICLE: 17 players could leave the Yankees this year, find out who might stay!Â

At this point, Chapman remains one of the more dominant closers in baseball with his ferocious fastball, but the Yankees could look to gain capital in exchange for him.

One team that makes sense in a potential trade would be the Philadelphia Phillies, who simply missed out on the playoffs due to their bullpen. Their 7.06 ERA, 1.79 WHIP, and .315 batting average against were all last in the MLB.

Gathering prospects or immediate starters would be beneficial for the Yankees, who could use the bolstering in their mid-bullpen and outfield. Chapman is scheduled to make $15 million in 2021 and will be a free agent after the 2022 season. That gives any given team two more years of control, and the Yankees could always elevate Zack Britton into the closer role, which he has enjoyed success in.

With Tommy Kahnle returning from Tommy John surgery next year, I expect the Yankees to go out and find another solid bullpen arm. Trading Chapman is only acceptable if Britton is forced into the closer role, which is reasonable, considering he finished the year with a 1.89 ERA and eight saves. He only allowed four runs and zero homers over 19 innings.