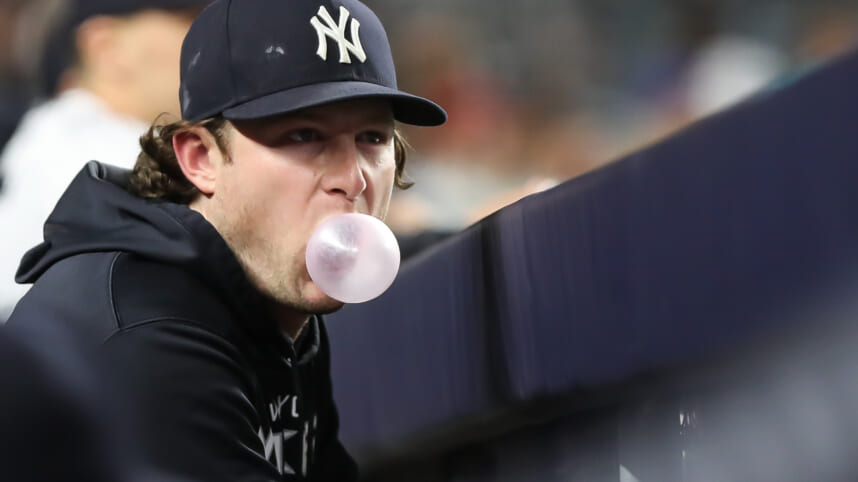 The New York Yankees finally emerged victorious against the Toronto Blue Jays on Sunday afternoon by a score of 4–2. For Toronto, starting pitcher Alek Manoah gave up two runs and four hits over 6.0 innings, but two high pitches to Aaron Judge nearly sparked a hostile situation.

In the 5th inning, Judge was plunked on the elbow by a high pitch. Following the HBP, Judge stared daggers at Manoah, who indicated it was a mistake and he was trying to keep him off base.

“Been struggling with my sinker for about five, six starts now,” Manoah explained after the game. “I made a pitch and it obviously hit Judge. I looked at him, said, ‘Man, you know, I’m not trying to do that.'”

“[Judge] looked at me and he’s like, ‘That’s two,'” Manoah said. “In the first inning, I did mistakenly throw one up there as well. But obviously, in a situation like that, I’m trying to minimize baserunners. So I told him, ‘I’m not trying to do that.'”

However, star pitcher for the Yankees, Gerrit Cole, begin walking out of the dugout and toward the diamond before being stopped at the Audi sign.

“I think [Judge] understood that. And I think if Gerrit wants to do something, he can walk past the Audi sign next time,” Manoah said.

The Yankees almost got themselves in an interesting situation:

Cole was ready to defend his team’s top player, who’s been struggling considerably over the past two weeks. In fact, in the month of August, Judge is hitting .267 with a 44% on-base rate, hitting only four homers in 60 at-bats.

By most accounts, he’s having another stellar month simply because opposing pitchers are walking him at an extravagant rate. His power has fallen by the wayside just a bit, but there’s no doubt he will return to form with one momentous blast.

In the meantime, the Yankees are just desperately trying to maintain their lead in the AL East, preparing to face off against the New York Mets in a two-game series starting Monday night.

They will have to face Max Scherzer and Jacob deGrom in consecutive days. If the Yankees can walk away with a few runs in both games against two of the league’s best pitchers, they should feel satisfied heading into a four-game series against the Oakland Athletics.