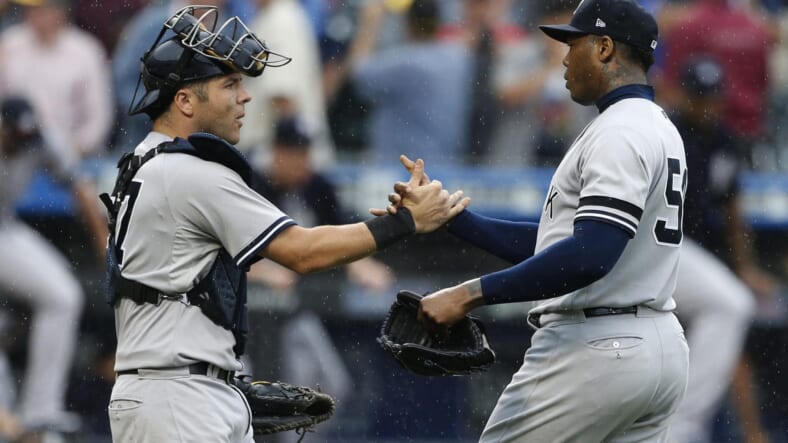 After the New York Yankees surrendered a 5-0 lead in the eighth, Austin Romine brought out the heroics. He hit a hard ground-ball that just got through the left side to tie it up in the bottom of the inning. After zeros in the ninth for both sides, we went to extras. Zack Britton pitched a scoreless inning in the top half of the tenth, before Romine walked it off with a gapper to right-center.

James Paxton was fantastic yet again. Over six innings, he allowed just three hits with no runs scoring, striking out 12. He was the 11th pitcher all-time to punch-out 12 in consecutive scoreless appearances (per Yankees PR).

Paxton had a whopping 20 swing-and-misses, the second straight start he did that. He also threw 15 first pitch strikes to 22 batters.

But, the bullpen had no plans of continuing that success. This is a classic example of Murphy’s law; what could go wrong did go wrong.

Chad Green came in relief, and it took him just 12 pitches to load the bases with two singles and a walk.

Green was pulled immediately, and Adam Ottavino came in. This is where it got ugly.

They say that bases loaded with nobody out is the worst possible scenario for a reliever. And this time, it did not go well for Ottavino.

Adalberto Mondesi knocked in two on a double, right before Alex Gordon smacked a three-run home run. This tied the game up at five, for about thirty seconds. Hunter Dozier hit a solo home run on the very next pitch, making it 6-5 Kansas City.

And magically, the Yankees pulled it out with the help of Romine.

Clint Frazier can’t stop and won’t stop mashing. This dude murdered one over the visiting bullpen in the fifth inning for a three-run shot.

Overall, the Yankees are incredibly lucky to have won this ballgame. Every sign pointed towards them losing after the eighth, but they proved their resilience. They are also lucky to have a guy like Austin Romine as the back-up catcher. He is definitely good enough to have a starting job on a big-league club, but the Yankees want him and he wants the Yankees.

The Yankees now trek way west to Anaheim to take on the Angels on Monday with a 10:05PM (ET) start. JA Happ gets the ball for the Yankees against old cross-town rival Matt Harvey, now on the Angeles after being dumped by the Mets and not resigned by the Reds.