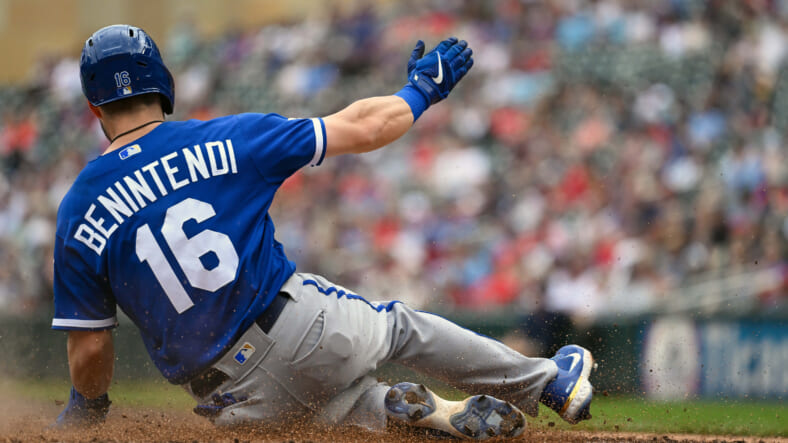 For the Yankees, getting a star OF would make a ton of sense. Ian Happ and Bryan Reynolds are both guys they could be interested in, but how much would the Yankees have to give up to get either of the two? You’d imagine talks about Reynolds start with Anthony Volpe, and the Yankees won’t trade Volpe. Why trade a top 10 prospect at a position you currently don’t have a long-term solution at? As for Ian Happ, he could cost the Yankees Oswald Peraza a potential option to replace the struggling Isiah Kiner-Falefa. If the Yankees are also truly interested in Luis Castillo, how do they get better without blowing up the farm completely?

There are rental options on the market, but do any of them have the current production and projected value of Andrew Benintendi? In this case, for the Yankees to pursue a Luis Castillo and get better in the outfield, Andrew Benintendi is the best of both worlds.

Product Of Playing For a Bad Team?

Andrew Benintendi has started walking a lot more, boasting a .384 OBP, which is top 15 in Major League Baseball. This isn’t necessarily new for Benintendi, who was an on-base machine in Fenway. There could be concern that he just walks so much because batters are pitching around him, but how true is that? His 22.4% Chase Rate (via StatCast) is the 28th lowest among 154 qualified hitters. He would lead the Yankees in that stat, so his plate discipline really stands out in a good way. Not looking good for the “product of a good lineup” theory.

Being a Road Warrior

Andrew Benintendi doesn’t pull many flyballs, so I won’t claim that he’ll suddenly become a 20 HR hitter in New York, but he definitely is better when playing away from a cavernous ballpark that has a really deep right-field like Kauffman. I wonder if that’s just variance, but with over 400 road PAs and home PAs as a Royal, that seems less likely. If he could have his power unlocked as a Yankee, you could see the best version of Benintendi yet, and that would bring tremendous offensive value.

The Price is Right

In a report by the Daily News’ Kristie Ackert, “Even in the lowest level Florida Complex League, the source said there are “lots of players to consider,” in a possible deal.” This made Justin Lange, acquired in the Luke Voit trade, come to mind. A power right-handed arm with control issues, he has great stuff. The Yankees could package him and Double-A OF Jeisson Rosario to be secondary pieces in this deal. Jeisson Rosario has a .348 OBP in Somerset and has okay value as a 4th OF on an MLB team eventually. The top prospect in this deal is Yoendrys Gomez, a RHP with a high-spinning FB that generates over 2,500 RPMs of spin. Sitting in the mid-90s, he has a power arm that should at least make him a good reliever. Injuries have slowed him down, but this year he has a sub-2 ERA in High-A with Hudson Valley.

This deal could net the Yankees Andrew Benintendi, who has a 123 OPS+ and 2.2 WAR (according to Baseball Reference) on the season. With Aaron Hicks’ bone contusion, it might be even more important for the Yankees to get the left-handed OF.

What Should the Yankees Expect From Andrew Benintendi?

So far on the season, Benintendi boasts a 126 wRC+ and 1.9 fWAR, both marks that would rank highly on the Yankees. The question isn’t has he been good this season, but if he can sustain that production in NY. Projections are a great tool for looking at how a player will perform in a given season, and here’s how various well-regarded systems project him:

So ZiPS is the highest on Benintendi, and Steamer is the lowest. Benintendi’s OBP probably ends up closer to what ZiPS thinks, while his SLG is closer to what Steamer. Still, getting a .750-.780 OPS bat in this run depressed environment is a well-above-average bat. The Yankees should expect to get a solid hitter out of Benintendi, someone with great OBP skills. There’s a real chance Benintendi has a bit of a power surge in the Bronx since he won’t have to be so single-reliant to get hits here, but if he’s what he is right now, that’s perfect. The Yankees could get a ton of value without giving up much in terms of prospect capital.