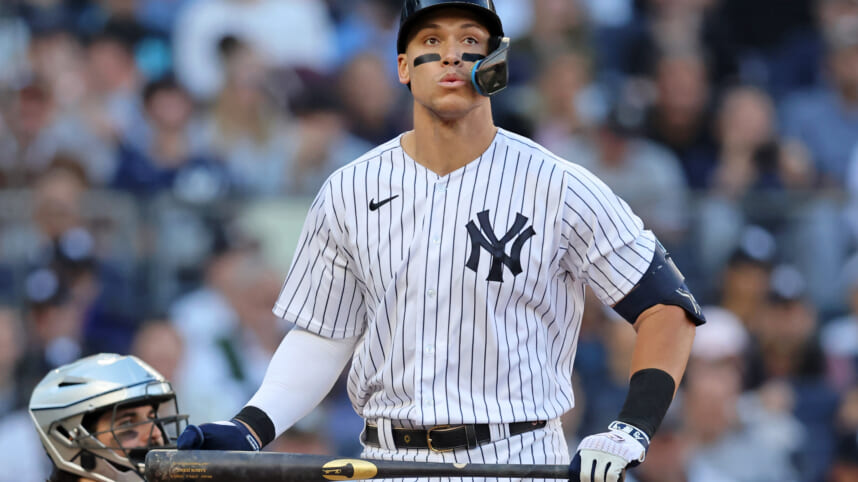 Earlier today, The Athletic published a piece put together by their staff writers consisting of where they see Yankees‘ Aaron Judge’s possible landing destinations being. The list was comprised of six teams, all of which had their reasons for why it makes sense. Yet, the biggest question remains what Judge will want from a years-commitment?

Everyone knows he’s going to command a contract well over the $230 million offer the Yankees made to him prior to his historic 2022 season. However, nobody knows if it’ll be for seven years or if it’ll be for ten. Additionally, Judge wants to compete and play meaningful baseball, even if all the organizations below didn’t get past the Championship Series.

Here at Empire Sports Media, we have had long discussions about what Judge’s future holds and which organizations would be the biggest threat to the Yanks’ retaining him. I believe that Judge’s final choices will boil down to four teams, with them all being, in a way, obvious.

The four most likely destinations for Yankees’ Aaron Judge:

The most obvious of the four choices for Judge is the organization that gave him his first opportunity. Many forget that this same Yankees organization that was so reluctant to move on from mediocre prospects also managed to hit it out of the park when they drafted Aaron Judge in the 2013 MLB draft, 32nd overall. Judge has risen through the ranks in Pinstripes, from his debut with Tyler Austin and the other Baby Bombers to now being the most renowned name in the league.

Everyone loves Aaron Judge unless he’s playing against you. Judge did everything right this season and made sure to bet on himself prior to dipping into his bag and dominating the league. En route to a 207 wRC+ year, with the AL record 62 HR, Judge also took charge of the team when they were struggling. Like it or not, the Yankees wouldn’t have made the playoffs if not for Judge, and we saw the most fWAR put together in a season since Bonds. Judge did everything, and there’s a reason the Judge’s Chambers are one of Hal’s biggest-and-best sellers at the Stadium. When you go watch Yankees games, many are there to see Aaron Judge do what he does best. Consistently top of the league in jersey sales, MVP finishes and has evolved into one of — if not the best, hitters in the game right now.

The Yankees have the money to bring back Judge and seeing that Britton, Chapman, Donaldson (hopefully), Green, Taillon, and various others that are coming off the book, there should be no excuses. They lowballed him with the $230 million, and hopefully, they can come to realize just how huge Aaron Judge is to the success and longevity of this team. What I don’t want to see is the Yanks refusing to meet Judge’s asking price and then proceeding to spend a similar amount of money on “fixer-uppers.”

The Giants have been the most heavily linked team to Judge for some time now, and the money that they have on the books over the next few years is very low for a team of their market, giving them lead cause to bring in a superstar. Aaron Judge is also from the Sacramento area, and I could see him wanting to return to the West Coast and swing the bat down in the bay. However, Judge would have to be won over by the FO and would want to see a quality squad put around him.

The Giants weren’t amazing last season, albeit they did finish .500 at 81-81. Looking forward, though, the division isn’t getting any easier, and the Padres & Dodgers will likely lead the race in the NL West for the foreseeable future. Their 81-81 record saw them 31.0 GB of the Dodgers, who were annihilating their opponents left-and-right. They also missed the WC spot by six games in a year where it was expanded to introduce more competition. The biggest thing the Giants have is that they have the cash and market to draw Judgey over from the Bronx, and with an active payroll of only $105 million (expected to level out around $130/$140 million following arbitration hearings), they could very easily make a splash for Aaron Judge.

Similar to the reasons for the Giants, the Dodgers could pull Judge over because they are on the West Coast, but many believed that for that same reason, Gerrit Cole would’ve gone to LA or Anaheim. The Dodgers have become what people called the Yankees for the entire 2010’s, a “buy your ring” organization. That doesn’t sit right with me because I personally don’t think you should ever fault an organization and its’ owners for spending money on the club. Would you rather everyone be like the Guardians and Rays, with a dash of Athletics? No, the Dodgers spend money, draw revenue numbers that dwarf what they did in years past, and have the fans to back it up. They had a more disappointing season than the Yanks, yes, but they will just prepare for another huge offseason to recoup.

The Freeman signing was a clear victory for the team, and now they may turn their sights to Judge. If they choose to let Trea Turner walk, I could see them going all in on Judge, thus moving Betts to 2B. The Dodgers would have the best team in baseball, once again, if they are to pry Judge from the Bronx. That team, that won 111 games this season, could very easily repeat that feat next season. Yet, it didn’t mean anything when the Phillies came to town. Judge wants to compete and win championships; he has stated numerous times that he wants to bring a ring back to the Bronx. Sometimes, we can’t all have what we want, and maybe Judge turns his sights west and sees the super team being put together by Friedman and co.

This is the least likely of these four spots as I believe that the only reason Judge would jump across the pond would be if Uncle Steve can fork over $400 million+ for the big fella. I wouldn’t be shocked to see Cohen and the Mets’ FO spend like crazy, seeing as to how they’re going to be losing a good portion of their current roster, and guys like Pete Alonso are going to be wanting to get paid soon. Judge enjoys playing baseball in New York, but I can’t see him moving across town to Queens, especially given the fact that Judge wants to compete. It doesn’t seem like the Mets are going to have that great of a returning squad, with both Nimmo and deGrom likely to go elsewhere and various other pieces not returning. The health of Marte remains a question, and has Scherzer finally run out of gas?

The Mets have the means necessary to bring Judge in, and having Cohen’s wallet backing them up in every negotiation, they can make it happen. I personally believe that they’ll be looking to retain Nimmo and focus on pitching — could see Carlos Rodon headed to Queens, assuming deGrom doesn’t return. The Mets aren’t a bad team by any means, but I just don’t see how they can financially make it all work. Unless they choose not to pay Pete Alonso, in which case Judge could be on the table. I just can’t see Judge exchanging the proper pinstripes for the discount ones.

Judge Ultimately has all the Leverage:

Every team would love to have Aaron Judge’s signature and commitment to playing elite baseball for years to come. Not every team has the means necessary to do so, and no team has the upper hand. Aaron Judge chose to bet on himself before the season, and when many scoffed and said, “should’ve taken your money,” Judge responded by putting together the best season I have ever seen with my own two eyes. He has every bit of high ground imaginable, and I hope Cashman doesn’t tell Aaron that he underestimates his power. If the Yankees choose to sit idly by whilst watching Judge field offers and hear the market, they could be burned this offseason. They must figure out Judge’s situation sooner than later and should actively be engaged in the market during.

Judge going elsewhere would really be a drastic mistake for the Yankees, especially because of how important of a player he is for the fans and franchise. Judge brings in hundreds of millions just on his own, and I think Hal and Cashman will realize the importance of having him in the clubhouse. Guys like Nestor Cortes and Jose Trevino have been outspoken about how great of a person and leader he is, on top of being the best player they’ve had the joy of suiting up with. The players want him back, he wants to return, but he also wants to be properly compensated.

If the Yankees choose to dilly-dally, and Judge decides to go elsewhere, it’ll be interesting to see where that place may be. These three alternative destinations are in no way the only places he’ll be considering, I just believe that these three are the most likely. Of course, there’s other organizations out there that could throw their hat in the ring; Cubs, Red Sox (not really, but never know what Chaim Bloom is thinking), and even the Orioles could want to build their exceptional young squad around their first marquee signing. It’s baseball, anything can happen, and last year let’s not forget that the O’s were very in on Carlos Correa.

This offseason should be a wild one once it fully gets into swing, and the Aaron Judge sweepstakes will be the headline of the winter. Perhaps the Yankees even resign Rizzo before they turn to Judge, because both guys are such good friends. Any tactic and draw to keep him in the Bronx, whilst giving him what he deserves, should be considered a win. The Yankees say they want to win and that they believe the squad can compete for a ring every year, lets at least keep that hope alive by bringing back Judge.