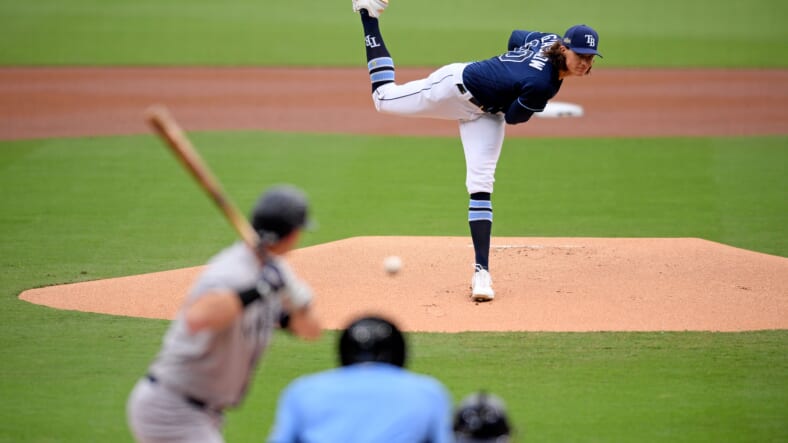 After losing two consecutive games to the Tampa Bay Rays in the ALDS, the New York Yankees bounced back with a game 4 victory on Thursday evening.

By a score of 5-1, the pitching with stellar, and the offense did just enough to overcome a strong Tampa team. Starting pitcher Jordan Montgomery was fantastic, allowing just one run and three hits. The bullpen also showed up to play, holding the Rays hitless and scoreless for the remainder of the game.

However, game five will feature both Gerrit Cole and Tyler Glasnow, two lethal arms that can do damage against any team.

TOP ARTICLE OF THE DAY:

Three things the Yankees need to do to beat the Rays in game 5:

1.) Gerrit Cole needs to be masterful

In game one against the Rays, Cole lasted six innings and gave up three earned runs. He has a combined 2.75 ERA during exhibition play this year and will get the start on Friday night against Tampa. He is the Yankeesâ€™ best shot at winning the series and moving onto the Houston Astros, which seems like a series bound for destiny.

With four days of rest, Cole should be ready to go, and the Yankees need him to be at the top of his game if they want to walk away the victors.

Tyler Glasnow is a fantastic pitcher who heavily relies on his fastball. He averages 97.4 mph on his fastball and throws it 60.6% of the time. His second-best pitch is his curveball, which he throws 34.8% of the time and averages 91.5 mph. With only a few days rest, Glasnow could be on a pitch count, and the Yankees must remain patient at the plate and wait on his fastball.

Fatiguing him early on should decrease his velocity and give the Yankees a better chance of hitting his best pitch. Again, patience at the plate and staying disciplined is essential for a Yankee team that tends to strike out far too often and swing erratically at the first pitch.

The Yankees have all but replaced Gary Sanchez during the postseason this year. Kyle Higashioka started the last two games and looked stellar on defense and offense.

When standing in the batter’s box, he is averaging .313 and slugging .500. His on-base + slugging is .853. Against the Rays in game 4, Higashioka had two hits, including an RBI single in the 8th inning to extend the lead to five.

Defensively, he has zero past balls, while Sanchez has 2 in just two games. He is a must-start for the Yankees, especially with Cole on the mound. He could be the catalyst once more for them on both sides of the ball.