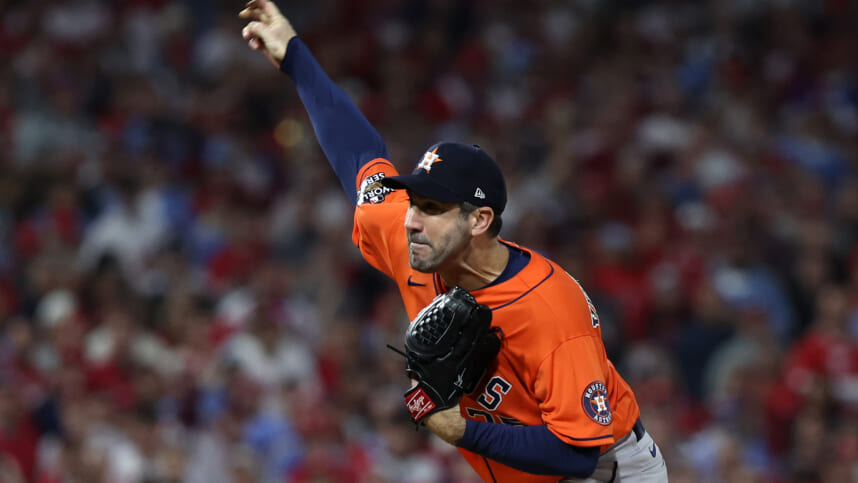 While the New York Yankees have a bit of leverage in the Aaron Judge sweepstakes, given he desires to continue wearing pinstripes, the probability of the superstar slugger remaining in the Bronx is over 50%. However, the expectation is that several clubs with expansive financial situations will make a serious run at his services.

Judge is coming off a historical season at 30 years old, hitting .311 with a 42.5% on-base rate, 62 homers, and 131 RBIs. He played 157 games, the most in his entire career, continuously dominating before an otherwise underwhelming playoffs.

If the Yankees, for whatever reason, miss out on extending Judge, they could turn their attention to two superstars who could fit the bill over a shorter-term contract and still maintain the Yankees’ World Series aspirations.

Two players the Yankees could turn to instead of Aaron Judge:

It is clear that Verlander is having a phenomenal campaign following Tommy John surgery, signing a two-year, $50 million deal with the Astros, including a player option before this season. The expectation is that he will likely opt out in search of a more prominent deal, so the Yankees could get involved if that ends up being the case.

The Bombers aren’t losing too many starting pitching pieces, with Jameson Taillon the only pitcher hitting free agency. Replacing him with Verlander would provide the team with an elite starting group, headlined by Gerrit Cole, Nestor Cortés, Luis Severino, and then the addition of Verlander. That’s not even mentioning Frankie Montas and retaining Domingo German.

A two-year, $60 million deal may be enticing for Verlander, giving them a bit more money on a short-term contract, which fits the Yankees’ mold perfectly.

If you can’t beat them, buy them, some would say. The Astros are one of the best organizations in baseball currently, so the Yankees taking some of their more prominent pieces could be a recipe for success. Owner Hal Steinbrenner refused to spend on Carlos Correa last off-season, preparing a monster extension for Aaron Judge.

Correa hit .291 with a 36.6% on-base rate this season, including 22 homers and 64 RBIs. His incredible ability to get on base and show up in clutch situations is undoubtedly an extremely enticing variable when it comes to Correa’s value. He’s an elite postseason hitter, in addition, hitting .272 with a 34.4% on-base rate and 18 homers over 79 postseason games.

The question is, what type of contract will Correa be seeking, or would he be more open to a short-term, high-money deal? Ultimately, the Yankees could shrink the years and overpay over a shorter term, which should still equate to a similar number they would offer Judge; they would just have to push past the luxury tax threshold this upcoming season.

Snagging Verlander and Correa would give the Yankees more than enough firepower to compete for a World Series, but they come with a lot of baggage Yankee fans may not desire via the cheating scandal from a few years back.