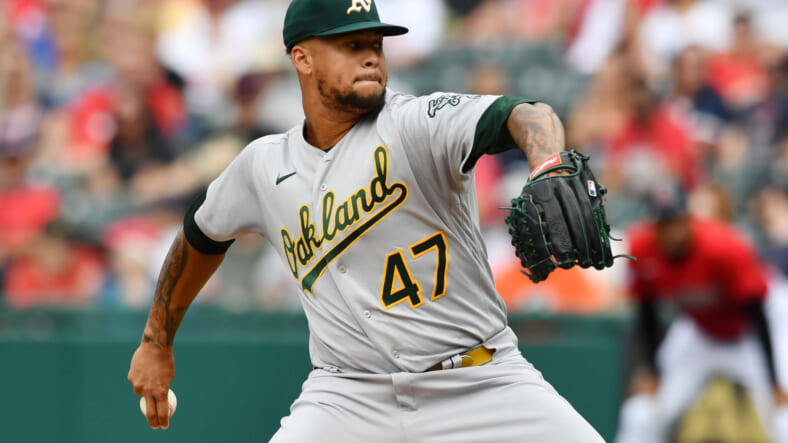 The New York Yankees’ starting pitching rotation has hit a bit of a speed bump the past few days, struggling to keep the Houston Astros and Tampa Bay Rays from scoring early and often.

Despite some difficult outings, the Yankees have still managed to extract victories at least 50% of the time over their last two series, showcasing their resiliency. However, reports have indicated that the Yankees could be intrigued by potential starting pitchers at the trade deadline in a few weeks.

According to Peter Gammons of The Athletic, the Yankees have spoken to Cincinnati about Luis Castillo, and Frankie Montas has also been mentioned as a potential target.

Two starting pitchers the Yankees could target at the trade deadline:

Between Castillo and Montas, the latter of the two might be the best option for the Yankees at this point in the season. Montas host a 3.21 ERA over 89.2 innings this season. He’s earned 9.23 strikeouts per nine and a 0.90 home runs per nine rate.

Montas is generating a 48.1% ground ball rate and 70.3% left on base rate. He features a fastball, slider, and split-fingered FB. A splitter and sinker make up a significant portion of his fastball metrics, two pitches that Matt Blake would love to get his hands on in the starting rotation.

Opposing batters are having serious trouble hitting Montas’s splitter, sitting at just .176 with a .250 slugging rate. His slider and 4-seam fastball are also effective, but his sinker has been weak this year. Batters are hitting .329 against it.

The question is, what would it take for the Yankees to acquire Montas from the Oakland Athletics. General manager Brian Cashman would have to be willing to give up multiple prospects. Montas is a free agent in 2024, so the Yankees would have him for 1.5 seasons. With that being the case, he might cost similar amount to Luis Castillo, so it is just a matter of what pitcher the Yankees prefer.

On the other hand, Cincinnati Reds star pitcher Luis Castillo fits the bill nicely for what the Yankees might need in the rotation.

Castillo features a fastball, slider, and a change-up. His sinker has been lackluster this year, but that is Matt Blake’s most teachable pitch. Castillo has a bit higher velocity than Montas but is also having a worse season compared to the Athletics star. Nonetheless, both offer immediate value, it’s just a matter of who they would replace in the starting rotation.