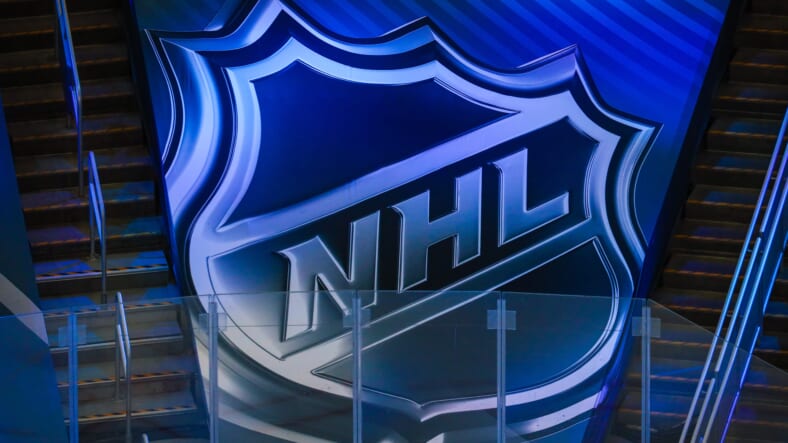 Aug 13, 2020; Edmonton, Alberta, CAN; General view of NHL logo in the stands during the warmup period between the Dallas Stars and the Calgary Flames in game two of the first round of the 2020 Stanley Cup Playoffs at Rogers Place. Mandatory Credit: Sergei Belski-USA TODAY Sports

The next step for the New York Rangers battle against the salary cap was announced on Tuesday with the announcement of dates for salary arbitration hearings.

With four Blueshirts filing for arbitration, Anthony DeAngelo, Alexandar Georgiev, Ryan Strome, and Brendan Lemieux, Jeff Gorton will look to sign all of these players before the hearings are conducted.

Salary arbitration hearings will be held from Oct. 20 through Nov. 8. A player can sign a contract with his current team any time before an arbitrator’s ruling. More times than not a player and the respected team will settle on a Â new deal prior to the hearings. Last year, 40 players filled for arbitration with only six going to an arbitration hearing.

The Ranger’s biggest contract concern has to be Strome’s impending deal. Strome just completed a two-year deal with the Edmonton Oilers that netted him $6.2 million. Â He is looking for at least a four or five-year deal probably in the neighborhood of $5- million per year. At the conclusion of his next contract signed, Strome will be an unrestricted Free Agent, so a one year deal would not be optimal for Gorton and the club.

The Rangers are in a tight salary cap situation because of two reasons. The club has to pay out approximately $13 million in buyout money this season. Â Dan Girardi ($1.1 million), Ryan Spooner ($300,000), Kevin Shattenkirk ($6.083 million), and Henrik Lundqvist ($5.5 million) will all have their buyout payments held against the salary cap.

The second factor to understand is signing bonuses. NHL teams are allowed a 7.5 % “performance bonus cushion” that is not held against the team’s salary cap.

Assuming that Lafrenière starts the season with the #Rangers, we now show NY as being $3,950,000 above the 7.5% performance bonus cushion.

That overflow is therefore applied to the clubs salary cap, leaving them with $18,804,367 in projected cap space.https://t.co/QZwIPWiV0y pic.twitter.com/qamT0syVwq

Any bonuses that exceed the cushion are held against the team’s cap. The Rangers added to that factor on Monday when they agreed to terms with Alexis Lafreniere.Â Â  The Blueshirts now have a projected cap space of $18,804,367 which includes a $2.85 million performance bonus.

As things stand after that announcement, Gorton’s club will have a $3.95 million penalty added to their cap hit. This would leave almost $19 million in projected cap space before the team has signed any of their four RFA’s.

The NHLPA announced its arbitration dates for each player on Tuesday evening. Gorton and John Davidson are now on the clock to get these players signed before each player’s hearing.

For the most part, the Rangers and their players who have filed for arbitration have been able to avoid going to an actual hearing with both sides agreeing on deals. The most recent time any Blueshirts went through with the hearing process was Sean Avery and Nikolai Zherdev in 2007.

A player cannot walk away from an arbitrated decision, but the Rangers can can walk away from any award of more than $4.538 million should they decide not to accept the arbitration award. The player would become an unrestricted free agent immediately.

The salary cap crunch the Rangers find themselves in right now, along with many teams in the NHL, could see them going through the hearing process this year.

I cannot see the team letting a player just leave, so an unwarranted decision against the team could leverage the club to make a trade to help resolve their cap problems.