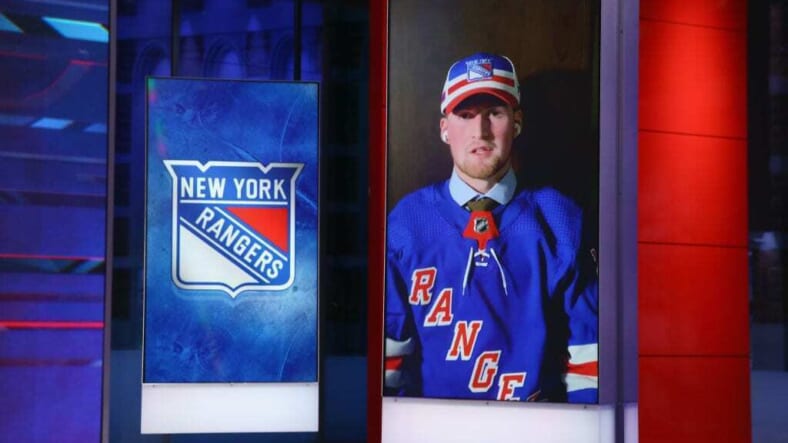 SECAUCUS, NEW JERSEY - OCTOBER 06: With the first pick of the 2020 NHL Draft, Alexis Lafreniere from Rimouski of the QMJHL is selected by the New York Rangers at the NHL Network Studio on October 06, 2020 in Secaucus, New Jersey. (Photo by Mike Stobe/Getty Images)

The New York Rangers announced on Monday afternoon that they have agreed to terms with their 2020 first-round draft pick, Alexis Lafreniere.

Lafreniere is the first player who has been selected by the Rangers with the first overall pick in the NHL Amateur/Entry Draft since the universal Draft was adopted in 1969.

The forward, who turned 19 years-old yesterday, skated in 52 games with the Rimouski Oceanic of the Quebec Major Junior Hockey League (QMJHL) this past season, registering 35 goals and 77 assists for 112 points, along with a plus-41 rating and 50 penalty minutes. He received several awards in 2019-20; he was named the Canadian Hockey League (CHL) Player of the Year, received the Michel Briere Trophy as the QMJHLâ€™s Most Valuable Player, received the Mike Bossy Trophy as the QMJHLâ€™s Best Professional Prospect.

The 6-2, 193-pounder has skated in 173 career QMJHL games over three seasons (2017-18 â€“ 2019-20), all with Rimouski, registering 114 goals and 183 assists for 297 points, along with a plus-128 rating and 176 penalty minutes. LafreniÃ¨re was named the CHL Player of the Year, the QMJHLâ€™s Most Valuable Player, and the QMJHLâ€™s Personality of the Year in each of the last two seasons (2018-19 and 2019-20); the only other player who has won each of those awards twice is Sidney Crosby. He has recorded 80 or more points in each of his three seasons in the QMJHL, including 100 or more points in two of those seasons, and he has also registered 35 or more goals in each of his three seasons in the league. LafreniÃ¨re has been named to the QMJHL First All-Star Team in each of his three seasons in the league, including his rookie season in 2017-18, when he was named the CHL Rookie of the Year and the QMJHL Rookie of the Year and registered a QMJHL career-high 42 goals in 60 games. His 42 goals in 2017-18 were the most by a QMJHL player in his U17 season or younger since Crosby (54 in 2003-04).