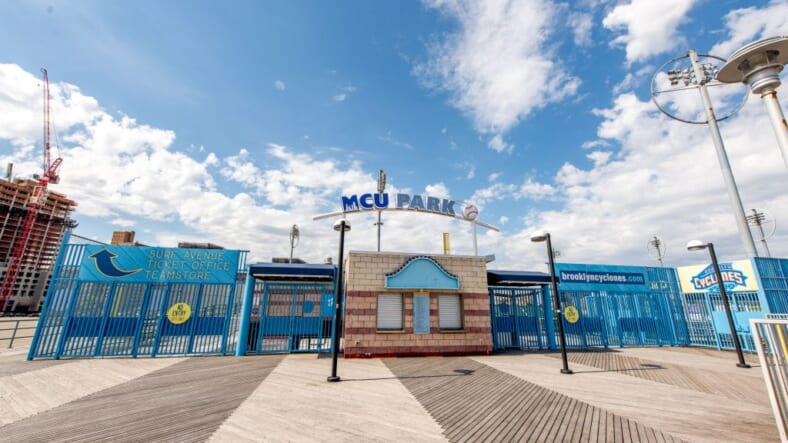 NEW YORK, NEW YORK - MAY 04: The MCU Park baseball field at Coney Island is closed during the coronavirus pandemic on May 04, 2020 in New York City. COVID-19 has spread to most countries around the world, claiming over 252,000 lives with over 3.6 million infections reported. (Photo by Roy Rochlin/Getty Images)

The New York Mets farm system has four players ranked in Major League Baseball’s Top 100 prospect list for the second consecutive year. As the front office looks to improve their farm system’s quality, these four players are certainly a terrific base for the rest of the upcoming talent.

#Mets catching prospect Francisco Alvarez was praised for his work on offense and behind the plate at the alt site. He has an advanced approach for his age and generates great bat speed. He barrels the ball well and could develop plus power. pic.twitter.com/lpy0TYKKiy

Francisco Alvarez is the highest-ranked Mets on the top-100 list. He is fourth in the catching class headlined by Adley Rutschman and Joey Bart. Alvarez’s meteoric rise is remarkable, considering he is still a teenager and only has 42 professional games under his belt. In those games, he slashed .312/.407/.510 with seven home runs and 26 RBIs. 2023 is his expected debut year and should garner the same hype Gary Sanchez did as a prospect.

Ronny Mauricio is the second Mets teenager to make the Top 100. At 6’3″, he figures to be a power-hitting shortstop once he improves upon his 166-pound frame. A good comparison would be Francisco Lindor with slightly less fielding ability. Unless the Mets do not keep Lindor, it will be unlikely Mauricio plays shortstop during his projected 2022 arrival year.

Matthew Allan could have been the top high school arm in the 2019 draft, but his commitment to the University of Florida and high asking price scared teams away. Allan fell to the third round, the Mets drafted him and convinced him to sign with the team. Much like Alvarez, he impressed at the 2020 alternate site with his power pitching. Allan projects to join the Mets in 2023 and is a potential ace that replaces Jacob deGrom.

Brett Baty already has the potential power to all fields, but his high strikeout rate is what comes with it. During 2019, he batted .234/.368/.452 with 35 walks and 65 strikeouts. Baty seems like a “three true outcomes” type of player now, but more experience in the minors should make him a complete hitter. While still a below-average defender, Baty projects to make his debut during the 2022 season.