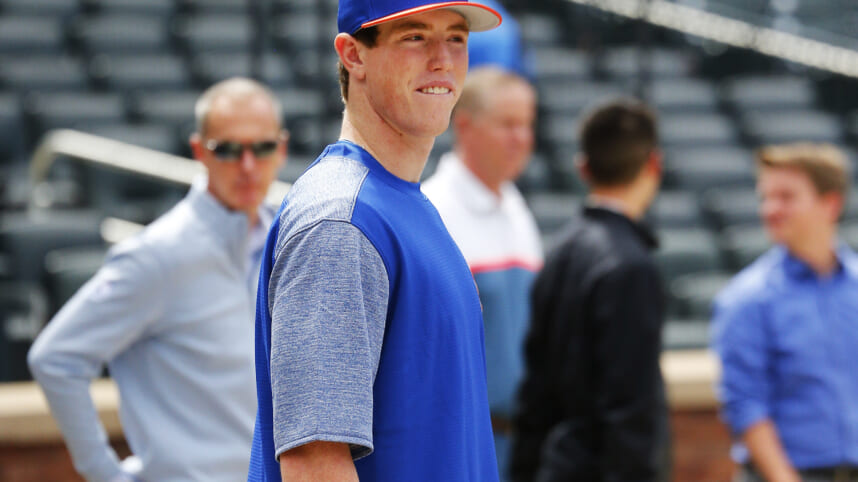 The anticipated move of the New York Mets calling up top prospect, Brett Baty is officially going through. Multiple reports have stated that he is supposed to meet with the team in Atlanta. Right away, Baty provides excitement and gives a needed boost to an injured Mets lineup.

Following recent injuries to Luis Guillorme and Eduardo Escobar, it seemed to be only a matter of time until Baty was promoted. Guillorme is supposed to miss at least a month with a groin injury. Escobar is not at 100% following Friday night’s game with tightness. He was scratched from today’s lineup.

It is expected that Baty will fill in for the Mets, where one of their biggest concerns currently is at third base.

What is Brett Baty bringing to the New York Mets?

Baty was the Mets’ second-ranked prospect in the minor leagues. He is an ultra-talented young player with the ability to hit for both contact and power. Experience in the field at third base will be key to developing even further and being a complete player for the Mets.

The move to call up Baty in the midst of a run at a World Series is eerily similar to what the Mets did when they called up top prospect Michael Conforto back in 2015. The team needed a young bat to infuse the lineup. Similarly, here, Baty gives the Mets lineup an upgrade with his natural bat hitting.

The Mets typically like to take their time calling up prospects. As a 22-year-old, Baty is in a perfect position to join the Mets. With the recent injuries, it makes the timing to call him up that much for logical. Baty has a promising future with the Mets and should provide contributions from the start.