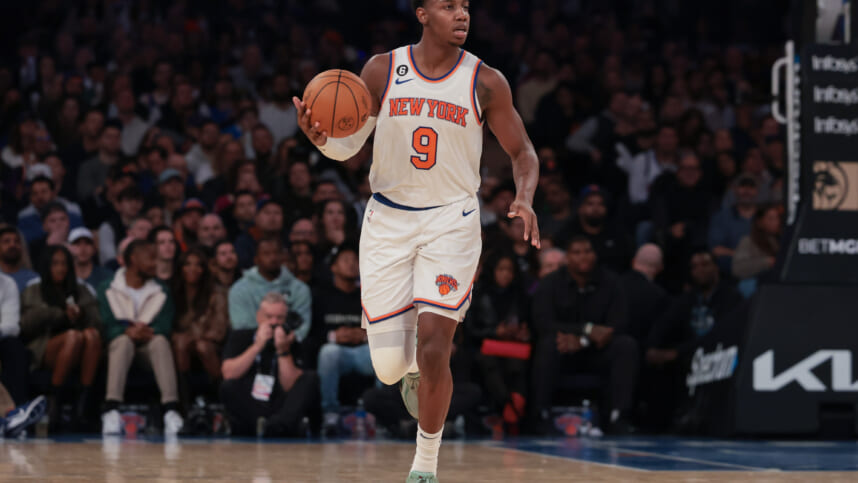 Fresh off of an offseason that saw Knicks‘ young star, RJ Barrett, secure a 4-year/$120 million contract extension, his 4th NBA season is starting off slow. Through 3 games, he is averaging 16/5/2 while shooting an abysmal 18.8% from 3-point distance, including missing his first 11 shots from outside the arc.

Many fans are already worrying about his inauspicious start, especially given that a lucrative contract extension was handed to him a year before he was set to become a free agent. However, three games into the new season is rather premature to be genuinely concerned about his performance. Judging a player off of such a small sample size is more of a cause for concern if anything.

Slow starts are the norm for RJ Barrett:

Barrett has a tendency to pick things up as the season progresses. In 2020-21, Barrett shot a league-average 35% from 3 before the All-Star break before stepping up in a big way, shooting a staggering 43.5% from 3 in 35 games after the All-Star break, helping lead the Knicks on their 16-4 run down the 20 game final stretch to get the Knicks back in the playoffs for the first time in what felt like an eternity.

Despite not shooting as efficiently last season, Barrett asserted dominance as a number 1 option in the second half of the season, taking a monumental leap from 18 PPG in the first half to 24 PPG after the All-Star break. This dazzling second-half lead him to his first 20+ PPG season of his career.

Even in games this season, that same trend has taken full effect. In Monday night’s 115-102 victory over the Magic, Barrett started the game incredibly shaky, not hitting a jumper from long range in the first half, an shooting just 1-9 from the field. It was eerily reminiscent of the Opening Night game against Memphis, where he had just 3 points in the first half while also shooting 1-9 from the field and 0-4 from 3.

Barrett looked to attack aggressively in traffic oftentimes throughout the game, forcing some tough layups underneath while also being off target from distance. While he looked better in second half Monday night, Barrett will surely have an extensive review of the film.

Barrett is a player of ascension for the Knicks:

Despite this season being his 4th in the NBA, Barrett is only 22 years old and seems to always play with a chip on his shoulder. In each of his first 3 full seasons, Barrett eclipsed his averages in the baseline categories (PPG, RPG, APG) and increased his shot volume from the previous season. He is trending in a direction that puts him in the criteria for being a rising star.

“He’s a really good player, and I can relate as far as what he’s done, and what I’ve seen from him so far in this offseason is he just keeps improving. That’s really what it’s about.”

Barrett exuberates confidence on and off the floor. Yes, slow starts to a season are not ideal. However, Barrett is still young and has lots of time to improve, and the stats will show that he does kick things into 3rd gear when needed to.

The reality is this: The Knicks are not poised to make a finals run this year. They are still developing their young talent for the long term, and that includes Barrett. As he develops more and matures his game, he will become more consistent and get going right away, and will, of course continue to improve because of his demeanor to improve. He will be fine. Now is not the time to overreact.