When will the Knicks do something about Tom Thibodeau? 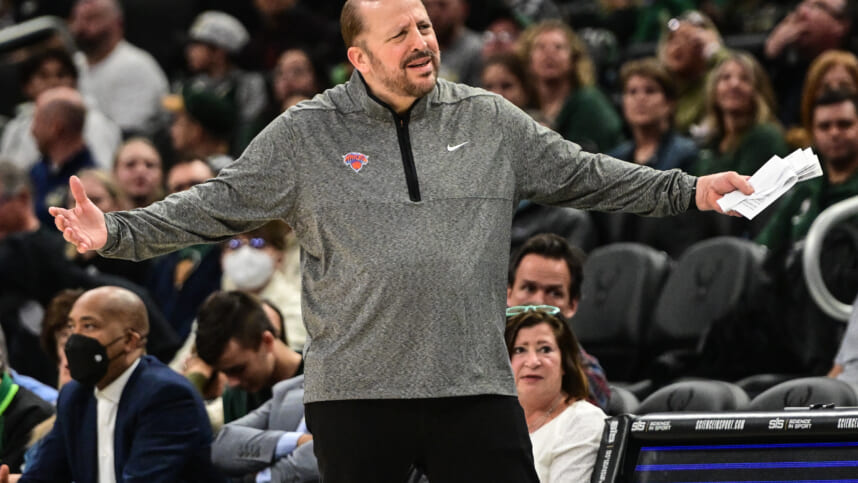 After the New York Knicks suffered a disastrous 145-135 loss at home to the Oklahoma City Thunder, much of the attention has surrounded the team’s head coach, Tom Thibodeau.

Despite the array of talent on the roster, the Knicks are off to a mediocre 6-7 record to start the season, and the pattern is becoming eerily similar to last year’s forgettable season. The question now becomes when will the Knicks take action against Thibodeau, presuming the Knicks continue to struggle?

SNY’s Ian Begley weighed in on what he thinks Thibodeau’s future with the Knicks holds.

“I think [Tom Thibodeau’s] seat is warm. I think that, just my guess, if you get a few more games like this where the Knicks just aren’t competing enough on the defensive end and they look like they let go of the rope for too long stretches of the game on this West Coast trip here, I would expect there to be a significant change, whether it’s Tom Thibodeau or something else”

The Knicks’ defense has been hard to watch:

Thibodeau’s defensive schemes have not worked out as planned. The Knicks currently have the 8th worst defensive rating in the NBA at 113.8, which is the worst in the three seasons Thibodeau has coached for the Knicks. New York has also allowed at least 100 points to their opponents in every single game this season.

The Knicks’ loss against Oklahoma City on Sunday was the tip of the iceberg from a defensive standpoint. The Thunder hit 17 threes and shot 54% from outside, as well as shooting an absurd 62.5% from the field overall. The Knicks’ struggles with guarding the perimeter have appeared to get worse each game, and it would be alarming if they get any worse than Sunday’s nightmare from here on out.

For a coach that has a reputation for being defensive-minded, these stats are polarizing.

Thibodeau has made some questionable decisions when it comes to his rotations, including having Derrick Rose guard Shai Gilgeous-Alexander for multiple possessions on Sunday, having Evan Fournier guard Donovan Mitchell against the Cavaliers two weeks ago, and not giving his best perimeter defender, Quentin Grimes, meaningful playing time even while the Knicks are struggling mightily on that end of the floor.

It is becoming more apparent that the defensive issues are not a player’s issue, but a scheme issue. It would also appear that Thibodeau has focused too heavily on blocking off baskets in the paint and has lacked focus on guarding perimeter shooters, which in today’s NBA is a must for coaching staffs.

Knicks fans have lost their patience with Tom Thibodeau. Social media has been filling up with comments and hashtags such as “#firethibs.” The fans want to see this team compete, not fall to the level of mediocrity like they are at right now, and they feel that Thibodeau will not get this team to that upper echelon of contender.

New York fans have always expressed strong desires for change, and at times they can be premature. However, they have a reasonable case here with Thibodeau.

The Knicks had extremely high expectations in the 2021-22 season after the Knicks made it back to the playoffs in Thibodeau’s first season as their head coach the year prior, a year in which he also won the NBA Coach Of The Year Award.

Those expectations were faltered when the Knicks played mediocre basketball for most of the 2021-22 season before going on an ugly 3-17 stretch over a 2020-game span that effectively ended their season.

Despite this, the Knicks stuck with Thibodeau as their head coach under the belief that having a better-constructed roster and a healthy regime will fix the Knicks’ problems.

Now, New York once again has high expectations this season with adding Jalen Brunson and signing RJ Barrett to a long-term extension coming off of a breakout year, as well as the roster being healthy for the most part.

The talent on the roster is there, but the performance so far has been nothing but underwhelming, which means that it may finally be time to consider if Thibodeau is the answer at the head coach position.

In the three seasons, Thibodeau has coached the Knicks, he holds an overall record of 84-83. Therefore, it would be a stretch to say the Knicks are a bad team under Thibodeau’s wing, but it is reasonable to say they are not good enough.

With the ultra-competitiveness the Eastern Conference presents itself to have this year, the Knicks look to be well on their way to a mediocre season with low expectations for a deep playoff run. The theme has consistently been falling short and underperforming, and it is shaping up to be the same theme without a change within the organization.

Will the Knicks finally pull the plug on the Tom Thibodeau experiment? Only the Knicks’ front office knows that answer.

Where you can find my other work :