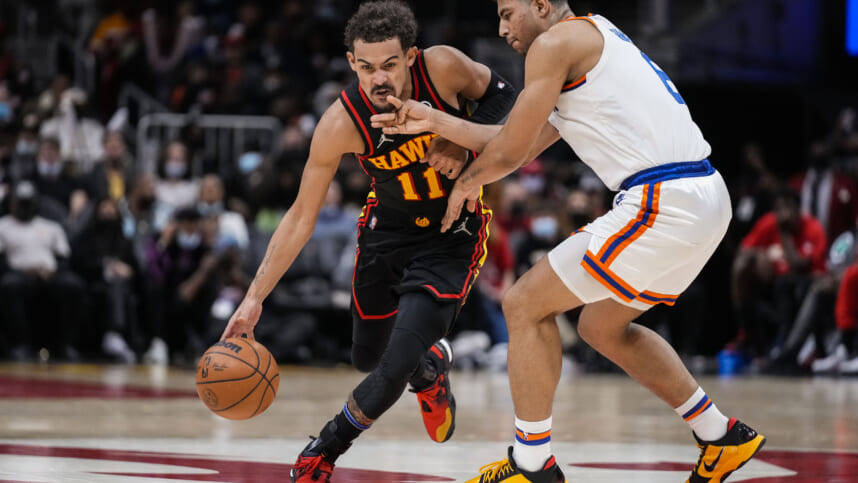 After missing the first six games, Quentin Grimes could finally make his season debut on Wednesday when the New York Knicks host arch-rival Atlanta Hawks at the Madison Square Garden.

“[Grimes] went through practice. He did everything, so we’ll see how he is tomorrow. I believe [his status] will be questionable but I’m not certain.”

Grimes’ defensive toughness will be much-needed against the Hawks All-Star backcourt of Trae Young and Dejounte Murray.

Young, the biggest Knicks villain since Reggie Miller, is coming off an ignominious triple-double (14 points, 10 assists and 10 turnovers) in an embarrassing 139-109 Hawks’ loss in Toronto. Expect Young to be fired up to bounce back at the Garden, where he rose to NBA stardom two seasons ago by killing the Knicks in the playoffs.

If Grimes is a go for the important matchup, it is unclear if his minutes will be capped.

In the Knicks’ preseason finale, Grimes played 16 scoreless minutes in his lone appearance that caused his left knee injury to flare up.

The 6-foot-5 wing averaged 6.5 points in 17 minutes off the bench during his rookie year while shooting 38.1 percent from the three-point range and providing stout individual defense.

Hopes are high for Grimes after an All-NBA Summer League Team run in Las Vegas in July leading the Knicks to the championship game with eye-popping numbers: 22.6 points and 3.4 3s per game on 41.4 percent overall shooting, 4.0 rebounds, 4.2 assists against 3.2 turnovers and 1.2 steals.

The Jazz highly coveted him in the nixed Donovan Mitchell trade, but the Knicks tried to keep him out of it. The Hawks also reportedly sought him in the Cam Reddish trade but eventually settled with Kevin Knox and a protected first-round pick.

He was expected to battle incumbent Evan Fournier for the starting shooting guard spot until soreness on his left knee bothered him after the first day of the training camp.