The Knicks are miles behind the rest of the Eastern Conference 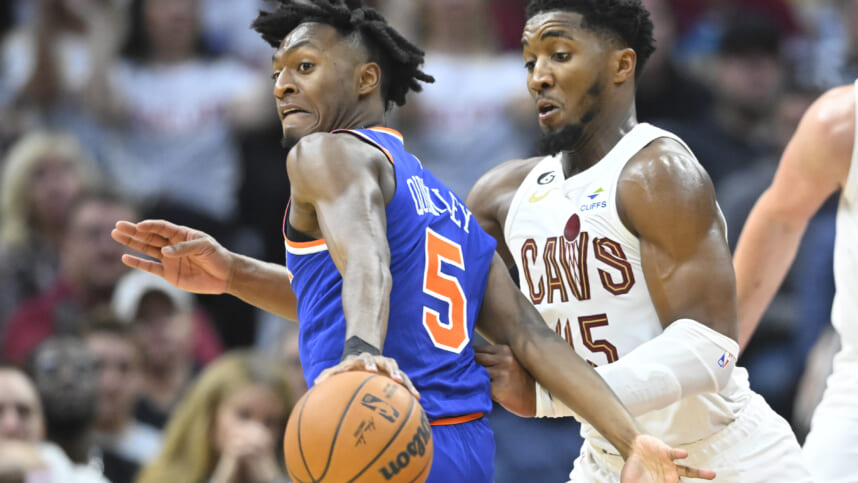 It is no secret that NBA success heavily relies on having a superstar. That’s the reason that the New York Knicks attempted to trade for superstar duo-guard and New York native Donovan Mitchell over the summer, but unfortunately, the Cleveland Cavaliers were able to get a deal done for him before the Knicks could.

In his first game against the Knicks as a Cav, Mitchell showed the Knicks organization and fans what they could have had by putting up a stat line of 38 points and 12 assists while shooting 12-20 from the field and 8-13 from 3pt range. The Knicks lost the game 121-108 in Cleveland. Cleveland did not even have their full-fledged squad out on the court, as all-star point guard Darius Garland was out with an eye laceration.

Before the game with the Cavs, they lost to the Bucks, headlined by former MVP Giannis Antetokounmpo’s 30 points, 14 rebounds, and nine assists. Their only other loss came at the hands of superstar point guard Ja Morant and the Memphis Grizzlies.

There seems to be a trend. Teams that have superstars are able to beat the Knicks, who realistically don’t. The Knicks have obvious good pieces, but not someone that can take the team over the hump of the playoffs and into a championship. If the Knicks are serious about winning a championship, they need to either acquire a superstar.

I say acquire rather than develop because it seems like the more likely direction the Knicks could take. This team will not be a bottom-tier team in the NBA and receive good draft lottery odds, especially since Knicks head coach Tom Thibodeau puts an importance into regular season wins. However, acquiring a superstar is no easy feat.

They do have one thing on their side for acquiring a superstar, however: draft picks. They have four first-round draft picks in next summer’s draft and seven over the next three drafts. Given the crazy amount of depth the Knicks have on their squad, there is no reason to select four players in the upcoming draft. These picks will be catalysts in acquiring a superstar to the Big Apple.

However, the Knicks allocated extension money (possible future cap money) to players on the current roster. RJ Barrett’s extension will command around 25 million dollars a year when it kicks in next season. Mitchell Robinson, Julius Randle, and Jalen Brunson are under contract for the next four seasons and will together make up around 55 million dollars a year in the cap.

Yes, the Knicks could match up the money in a hypothetical trade for a superstar. However, no team in the NBA does not want to be stuck with a team that is play-in purgatory and thus would be hesitant in acquiring Knicks players unless they were trying to reset their basketball talent as a franchise.

Even if the Knicks are planning to make a move for a superstar, who would it be? At this point, there are no teams that are willing to part with their superstars, and because of it, the Knicks would have to pay a very substantial price for a player. There is the possibility of trading after the draft lottery for one of the top selections, given prospects, Victor Wenbanyama and Scoot Henderson are surefire future NBA stars, but the Knicks would have to supply one of the all-star caliber players to the team they trade. The possibilities for acquiring a superstar are limited but very necessary.

In all, the Knicks have so much money invested into a team that currently has a very low ceiling in this league. It has put the organization in a difficult position to improve upon what they already have. And with Tom Thibodeau not entirely having the best track record with putting talent in the right place to succeed, who knows what the result will be? To have championship aspirations, the Knicks need to have the ability to compete with championship-caliber teams, and so far, they haven’t.