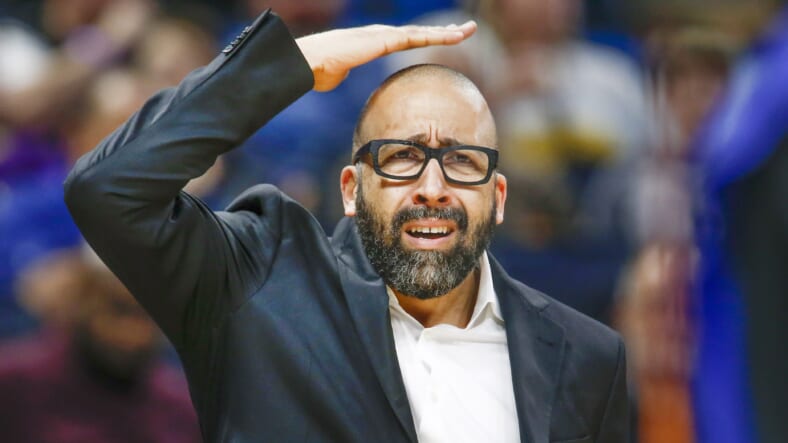 That first squad played well together and gave fans hope it could be the lineup moving forward.Â  The Knicks were in the game and their defense was on-point.Â  They were aggressive with active hands and hitting the glass.

The Knicks were led defensively by Ntilikina who had an outstanding game on both sides of the floor.Â  Coming out party?Â  Ntilikina was excellent on defense, locking down Luke Kennard, who’s been hot for Detroit.Â  He had active hands, making steals, blocks and staying in front of his man like an elite defender.

Ntilikina was, finally, making shots on the offensive side as well.Â  His shot look confident and he was knocking them down.Â  Even Alan Hahn was complimenting Ntilikina’s play, as fans saw the Ntilikina from the FIBA World Cup.

However, the Knicks did make Tony Snell look like a max player, who didn’t miss a shot all game.Â  Snell was the Pistons entire offense while the starting lineup kept the Knicks in the game.Â  Then David Fizdale subbed in the second-team and the game went down the tubes.

The defense from the second unit of Bobby Portis, Taj Gibson, Kevin Knox, Wayne Ellington and Barrett/Ntilikina was atrocious.Â  The Knicks got blasted in transition as the Pistons got numerous easy buckets from a leaking defender.Â  The paint was open the entire game when this lineup was in and the Knicks had no answer.

Their answer of Robinson went out in the first quarter when he got an inadvertent elbow to the face.Â  The first unit would come back into the game, scratch and claw their way back in due to the poor defense from the second team.

Besides Ntilikina’s overall play, Randle’s offensive performance, Knox’s shooting and Barrett’s aggressiveness were the only other highlights.

Randle showed fans the player that they hoped for when they signed him.Â  He was actually hitting 3-pointers too.Â  Randle still had turnover issues but what else do you expect.Â  Barrett was driving to the rim with a purpose and getting several and-one’s.Â  Knox had a confident stroke and his shot continues to look more polished.Â  Another reason why Knox should get more minutes and how he’s a cornerstone to the Knicks going forward.

Due to the lackadaisical, careless transition defense and inability to clog up the middle the Knicks fell for a fourth straight time to the Detroit Pistons, 122-102.Â  If there’s any positive to come out of last night’s game, it would be that they may have found a serviceable starting lineup, finally.Â  The second unit still needs a lot of work to find the right fit.