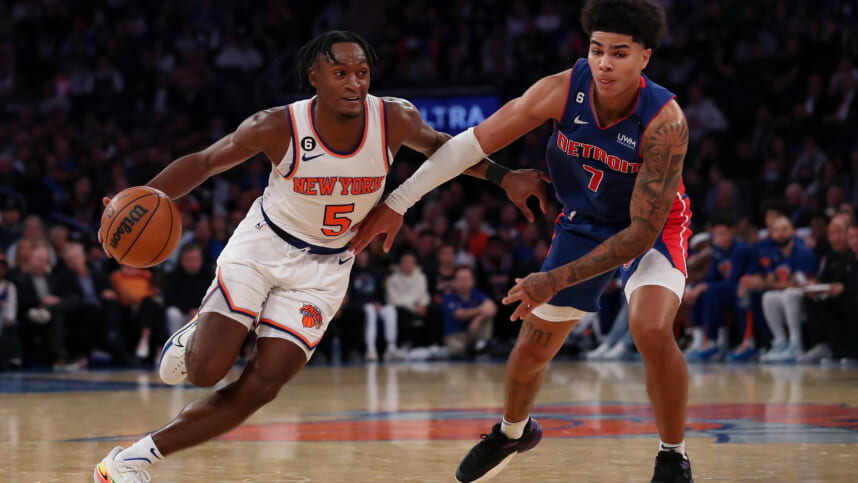 New York Knicks backup guard Immanuel Quickley continues to be mentioned in trade talks, and it is now reported that the Knicks are seeking a hefty return for Quickley, most notably a future first-round pick.

“According to sources around the league, the Knicks have targeted a future first-round pick in a return for Quickley, who is extension-eligible this upcoming summer.”

Fred Katz of The Athletic on Immanuel Quickley trade rumors

Immanuel Quickley has tons of value off the bench for the Knicks:

With Jalen Brunson taking up the starting job for the NYK, the only realistic route for Quickley to enter as a starter would be if Brunson went down with an injury.

As a result, the young guard has had limited opportunities to truly shine on the court due to inconsistent playing time, which contributes to the Knicks’ shopping of the third-year guard out of Kentucky as he is eligible for an extension in the upcoming offseason.

However, Quickley has shown to still be an impactful player despite also shooting inefficient splits, shooting just 37.9% from the field and 30.9% from 3.

His effort and tenacious play make him one of the most valuable bench players in the NBA, and he has now begun to establish himself as an elite two-way reserve with the potential to be an above-average starter elsewhere.

Therefore, the possibility of getting a first-round pick in return for Quickley is a not a foregone conclusion.

With the Knicks middling at a mediocre 9-9 start to the season, it is clear that New York is still missing that true superstar cornerstone to transform the organization from play-in threat to finals contender.

Getting a first-round pick or a player equivalent to that type of value in any potential Quickley trade would be a best-case scenario for them, as it will add to the surplus of draft capital New York already possesses, which can put the Knicks in an even greater position to pull off a blockbuster deal to get a superstar in the Big Apple.

The trade talks surrounding Quickley could last a while, yet he is not batting an eye to anything other than basketball as his name continues to circulate in headlines, speaking to Fred Katz of The Athletic about the situation on November 18 before their game against the Warriors.

“Honestly, I don’t really get into that kind of stuff. I’m just focused on the road trip, taking it one day at a time. That stuff works itself out just like the basketball works itself out.”

Immanuel Quickley on trade rumors via Fred Katz of The Athletic

While the trade proposals and phone calls, the Knicks still have basketball games to play. They will return from their Thanksgiving break when they head back home for a Friday night matchup against the Portland Trail Blazers.

They look to get back to over .500 and win consecutive games for the first time since they won both halves of a back-to-back last week that started the 5-game road trip.