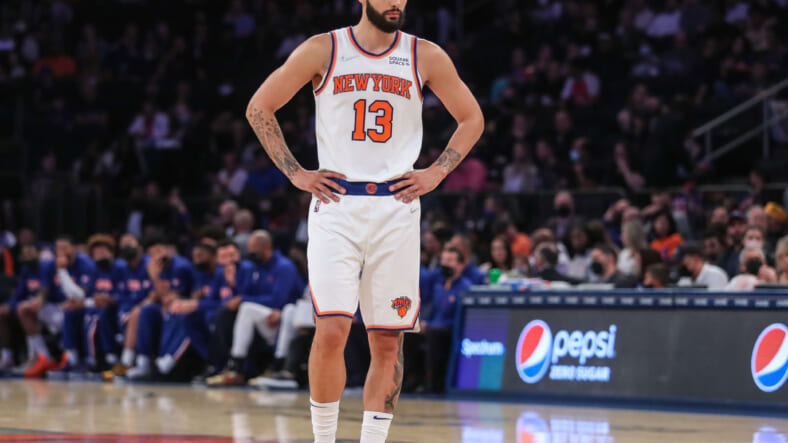 The writings on the wall.

Evan Fournier has officially become the Knicks‘ version of Kemba Walker — unplayable even when healthy and injuries plague his position.

Even after breaking the all-time Knicks record of 3-pointers made in a single season, Fournier was a polarizing figure among the Knicks fan base. His gallant effort on the defensive end could not hide his deficiency.

While he hopes to play again, that opportunity with the Knicks might have sailed. His best bet is somewhere else.

But his staggering contract — $18 million this season, $18.86 million next season, and a $19 million team option for the 2024-25 season — have made him somewhat of an albatross. The Knicks must take a hit to move him. And they’re not, at least for now, amenable to doing that.

“While Evan Fournier has fallen out of the rotation for the Knicks, New York is reluctant to attach a future first-round pick to move the French swingman at this time, league sources told HoopsHype.

There’s a big chance that fellow veteran Derrick Rose and third-year Immanuel Quickley, who is having his worst shooting season, could be moved before Fournier.

But the trio isn’t just the Knicks players reportedly available on the trade block.

Miles Mc Bride, who saw a season-high 14 minutes against the Phoenix Suns on Sunday while filling in for the injured Rose, is perceived around the league to be available too.

“Miles McBride is another player NBA executives around the league believe is available, given New York’s logjam at point guard. McBride has shown flashes in the G League and Summer League action as a defender.”

McBride took the most of the rare opportunity and scored 9 points on 4 of 6 shooting while collecting one steal off his usual burst of energy on the defensive end. The undersized guard is languishing at the end of the pecking order of guards just ahead of 15th man Ryan Arcidiacono and he would welcome a change of scenery to prove his worth.