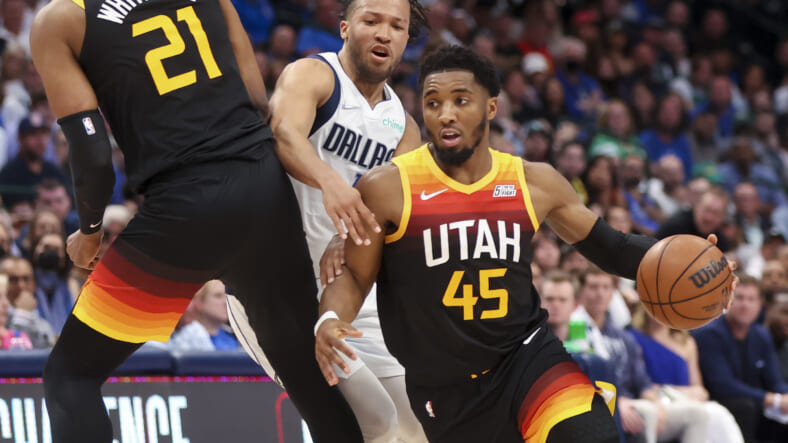 The trade talks have stalled out between New York and Utah surrounding three-time NBA All-Star Donovan Mitchell because apparently, the Knicks are reportedly not anywhere close to meeting Danny Ainge’s lofty asking price.

Jazz beat reporter Tony Jones of The Athletic said on ESPN 700 that the offers for Mitchell, including from the Knicks, have been underwhelming.

“I think that the Jazz are a little disappointed that offers have been, I don’t want to use the word low balling, but that’s probably the apt word to use right now,” Jones said.

While acknowledging that he doesn’t have the complete details of the trade package offered, Jones said, “the Knicks have asked the Jazz to take back multiple bad contracts, not just one bad contract.”

However, among the Knicks players, only Evan Fournier — owed $36.8 million guaranteed money over the next two seasons — and Julius Randle — set to start his four-year, $117 million extension — can be considered under bad contracts. Former MVP Derrick Rose, who turns 34 in October, has two years left on his deal but is only guaranteed for next season for $14.5 million.

Are the Knicks looking to dump Fournier and Randle’s long-term contracts to the Jazz (plus multiple first-round picks) for Mitchell and a salary filler such as Bojan Bogdanovic or Patrick Beverley’s expiring deals?

Unless the Knicks offer all their four unprotected picks, which is highly unlikely, the Jazz won’t take back Knicks’ ‘bad contracts.’

“I know that [the Knicks] tried to keep some of their young guys off the deal that they want to keep. I know that the Knicks are offering the Jazz a lot of picks, but a lot of the picks they’re offering are protected (picks) rather than unprotected,” Jones said. “So, the two sides just aren’t close at this point. And they haven’t been close.”

The Knicks have a total of eight first-round picks — four unprotected (2023, 2025, 2027, 2029) and four with varying degrees of protection from other teams — at their disposal. But they are unwilling to give away all of their unprotected picks to keep their powder dry for another star trade down the road, someone to pair up with Mitchell to make the Knicks a legitimate contender.

The Jazz have talked to other teams, such as the Washington Wizards and the Charlotte Hornets, but some of their picks are encumbered.

“What I know is Danny Ainge wants picks. If that holds true, then the Knicks are still pretty substantially the most logical destination for Donovan Mitchell because they are the only team that has the picks package that Danny Ainge wants,” Jones said.

The Jazz are expected to check back in with the Knicks after scouring the rest of the market. Will it be the Knicks or Jazz who blink first?

“I think this has the potential to go all the way down to the wire towards training camp,” Jones said.

The Jazz insider believes the Knicks are not incentivized at this point to improve their current offer. But the Jazz, however, are comfortable holding onto Mitchell until a team meets their threshold.

“The Jazz at this point are very clearly doing what’s best for them,” Jones said. “Mitchell is going to be with the Jazz, and if they do get a trade offer that they feel is fair, Mitchell will be traded.”

Even if that means Mitchell, who Jones believes, on some level, doesn’t really want to be around Utah’s rebuilding.