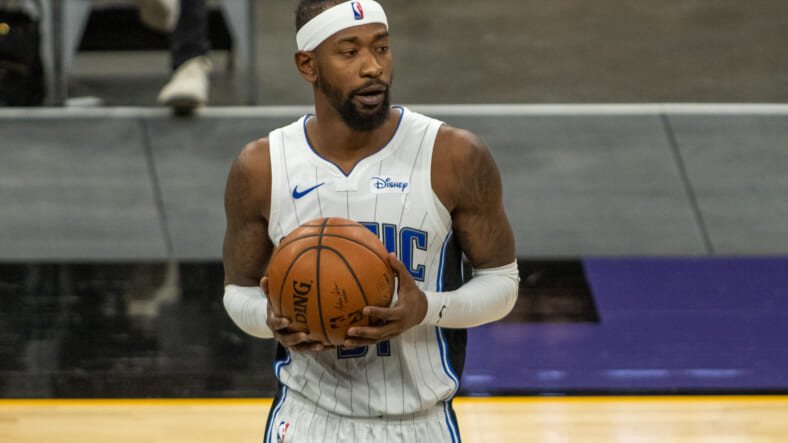 The New York Knicks‘ phone lines are busy exploring all their options ahead of tonight’s NBA Draft — from trading up into the lottery and swapping their picks for a veteran.

Chris Duarte remains the trade-up target for the Knicks, according to several reports. At the same time, Kevin O’Connor of The Ringer added that they are also in trade talks to acquire veteran guard Terrence Ross from Orlando Magic. Ian Begley of SNY was the first to note Ross’s involvement in trade discussions with several teams.

“League sources say the Knicks are involved in trade talks for Magic guard Terrence Ross. They would also like to move up in the draft, possibly to select Chris Duarte,” O’Connor wrote.

Ross is owed $24 million over the next two years and is due for a $12.5 million salary next season. With the Knicks having an ample cap space this summer, they can just absorb Ross’s salary in exchange for picks. The 30-year old guard is coming off his finest season, averaging a career-best 15.6 points and 2.3 assists. He shot 34 percent on 5.7 three-point attempts.

Ross torched the Knicks last season with a pair of explosive games. He had 19 points on 4-of-8 three-pointers and three assists in their first meeting back in January. He came back with a 30-point outing on 5-of-6 shooting from deep in their second meeting that he laced up with six rebounds, four assists, two steals, and two blocks.

The Knicks are looking to add more shooting and veteran presence at the wings with Alec Burks, and Reggie Bullock set to become free agents.

Meanwhile, the Indiana Pacers balked at the Knicks’ offer to trade up for their 13th pick in the lottery with their eyes on Oregon swingman Chris Duarte, per J. Michael of Indy Star.

“The New York Knicks have cap space and have expressed interest in jumping up from Nos. 19 and 21 for a shot at Duarte. Theyâ€™re open to part with players on their roster to get it done but they donâ€™t have a desirable group,” according to the Indy Star report.

Kevin Knox, who is still on a rookie contract with a cap-friendly $5.8 million owed next season, used to be high on the Pacers’ list, but that has dipped after the former lottery pick failed to carve out a meaningful role under coach Tom Thibodeau last season. Suffice to say that there’s no clear pathway for the Knicks to move up to the Pacers’ spot in the lottery.

“A little more than a season ago, Kevin Knox generated some interest from the Pacers, league sources said at the time, but that never went anywhere and he has since fallen off. With their cap space, the Knicks are able to absorb any undesirable contracts to make a deal but the Pacers donâ€™t have any,” the report added.

Interestingly, according to the same Indy Star report, the Knicks were one of the teams who received a call from the Los Angeles Lakers involving Kyle Kuzma.

“They offered Kyle Kuzma to Indiana for a pick swap that was declined (also have offered him to Utah, Minnesota, Cleveland, New York, and likely others),” the report said.

It is not clear if the Knicks-Lakers discussion gained traction. But it seems that talks are dead now as the Lakers have reportedly pivoted and stepped up their efforts to land Sacramento Kings’ Buddy Hield with a package centered on Kuzma.