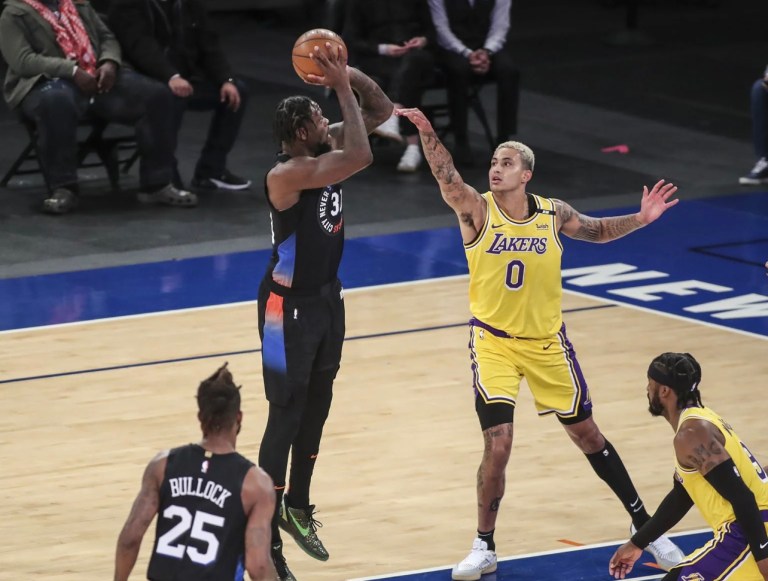 Julius Randle didn’t hide his feelings towards the team that drafted him.

When asked if he’s extra motivated to face the Los Angeles Lakers, he kept his answer short and gave his former team a long night.

“Always!” was his curt reply, then he proceeded to drop 34 points as the New York Knicks rolled to their third straight win with a 111-96 shellacking of the Lakers Monday night at The Garden.

Despite playing on the second night of a back-to-back homestand, Randle had an extra bounce in his game. He went 13-of-23 from the field, his best shooting night this month following a brutal stretch where he shot just under 40 percent in five of his last six games.

Randle was the Lakers’ lottery pick in 2014. The Lakers let him walk away after his rookie deal as LeBron James took his act to Hollywood.

It worked out well for both parties.

Randle blossomed into an All-Star in New York after a brief stop in New Orleans following his L.A. exit.

“It’s always fun. It’s the team that drafted me. I was there for four years. So you know, there’s always going to be extra (motivation),” Randle said after his masterful performance. “It’s always fun competing with your old team, but most of all, I just want to get the win and do what we’ve doing and protect the homecourt.”

Randle had already 19 in the first half, then came through with big baskets when the Lakers threatened in the second half.

RJ Barrett cooled off from his hot shooting streak as he missed his first eight shots. He finished with only seven on 2-of-11 shooting, but it didn’t matter as Randle was too hot to handle for the Lakers.

Dennis Schroder led the Lakers with 21 points, but Elfrid Payton negated him with 20 of his own.

A Randle three-pointer gave the Knicks a 15-point spread late in the third quarter. But the Lakers stormed back in the fourth quarter and came within five, 92-87, on a Markief Morris basket with 5:14 left.

Randle came to the Knicks’ rescue with six of the team’s next eight points to restore a double-digit lead, 100-87.

Derrick Rose came off the bench with 14 points, while Nerlens Noel and Taj Gibson did a yeoman’s job anchoring the Knicks’ middle.

The Knicks toyed around the Lakers’ defense which boasted of the best rating in the league even with the extended absence of James and Davis.

Noel and Gibson led the Knicks’ dominance on the boards, 47-33, and Tom Thibodeau’s signature defense forced the Lakers to 24 turnovers that led to 29 points.

The Knicks will try to extend their win streak when they embark on a two-game road trip against the New Orleans Pelicans (Wednesday) and the Dallas Mavericks (Friday).

They will return home on Sunday to host the Pelicans in a rematch.