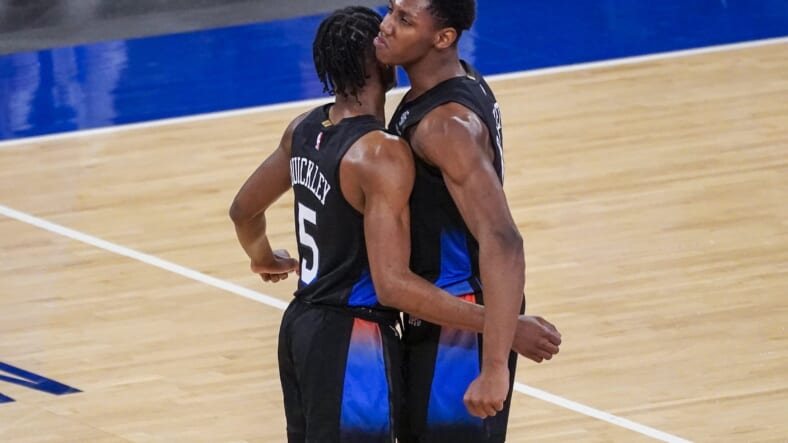 It was a big bounce-back win for the Knicks following a slip up against the Phoenix Suns, the second-best team in the West, last Monday. They find themselves all alone again as the fourth seed in the Eastern Conference after the Atlanta Hawks fell to the Philadephia 76ers earlier.

They had Quickley to thank for.

The rookie guard dropped 11 quick points in a dizzying 15-2 Knicks run to start of the fourth quarter. The Bulls never recovered.

â€œWe just enjoy playing with each other,â€ Quickley said. â€œEverything is clicking. We just want to continue to take the right steps and just try and make a playoff push.â€

By the time Quickley went out after picking up his fifth foul, the Knicks had transformed a precarious one-point lead to a dozen, 91-79, with 6:39 left.

The Knicks stepped on the pedal with Nerlens Noel anchoring their interior defense. Reggie Bullock and RJ Barrett hit a pair of dagger threes then Julius Randle brought them home with eight of his game-high 34 points inside the final two minutes.

It was Randleâ€™s seventh 30-point game in their last nine outings.

Randle sat on the bench when the Knicks pulled away in the fourth quarter. But he returned to the floor when the Bulls cut the Knicks lead to nine, 93-84, with 5:36 left.

New York blew hot and cold through the first three quarters before going full throttle in the fourth quarter. The Knicks outscored the Bulls, 37-19, in the final 12 minutes.

With Randle smoking hot in the first half, New York raced to an 18-point lead. But the Knicks let the Bulls hang around to Tom Thibodeauâ€™s chagrin.

Not even a technical foul could calm him down. But it worked as the Knicks responded and turned up the heat when it mattered.

Quickley picked up the slack for Derrick Rose, who had an off night.

The rookie spitfire finished with 13 points off the bench. Rose, who starred in his hometown Chicago as the youngest MVP early in his NBA career, added six points and six assists.

But it wasnâ€™t only Quickley who rose to the occasion. In a typical Knicks fashion this season, there were plenty of heroes.

Noel was all over the court for the Knicks. He countered Nikola Vucevicâ€™s monster game of 26 points and 18 rebounds with a defensive masterclass. Noel collected five shot blocks and four steals along with eight points, eight rebounds, and three assists.

Bullock hit three triples and ended up with 13 points. Barrett was efficient with 22 points on 9-of-15 shots. He also stuffed the stats sheet with seven rebounds, six assists, two steals, and one block.

The win was a fitting sendoff for the Knicks before they embark on a tough six-game West Coast trip beginning on Sunday in Houston.