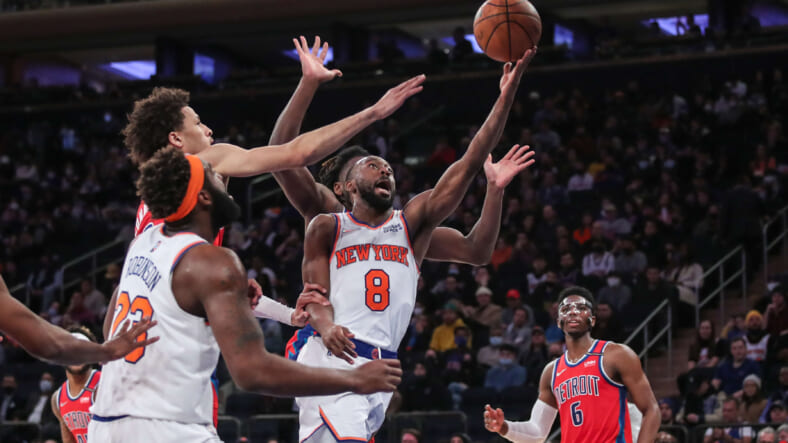 The Knicks traded Walker to the Detroit Pistons as a salary dump in the offseason, a move that landed them the much younger and healthier Jalen Brunson to helm their backcourt.

Walker is still on the Pistons roster, but they have mutually agreed that he would be away from the team as he seeks a better opportunity elsewhere. The only problem is no NBA team has shown interest so far.

Walker showed up in Charlotte last Friday when the Pistons visited the Hornets, his first NBA team, where he is their franchise scoring leader.

“That would be special [to return to Charlotte]. [But] as far as closing my career, I’ve got a few more years left in my opinion, so I’m not thinking about that yet. We’ll see. I’m just waiting. [Nobody’s] reached out to me. I’m just waiting.”

The Hornets might take a gamble on him as a depth piece after their current franchise cornerstone LaMelo Ball went down with an ankle injury.

When healthy, Walker can still light it up. But that has become a rare occurrence rather than the norm.

He had a six-game hot stretch bridging the end of November and December last year, which included a season-high 44-point performance against Washington and a Christmas Day triple-double against Atlanta. But his nagging knee injury has kept him in and out of the lineup and made him a bigger liability on defense.

“It’s never been basketball [performance]. It’s just been my knee. I don’t have [anything] to prove. Everybody knows what I’m about over the years, what I have done in this league.”

Last season was the worst in his career just a year after his knee began to bother him in Boston. The former three-time All-Star guard had more DNPs than double-digit scoring games.

Walker only appeared in 37 games and averaged 11.3 points, 3.0 rebounds and 3.5 assists, all career-lows. But the 32-year-old point guard still believes he has more to offer.

Where and when that opportunity will come from is a big question mark.

Far removed from his All-Star years, Walker is no longer seeking a starting role. All he wants is an opportunity to get back, which is rare for an oft-injured small guard. Ask another former Celtic, Isaiah Thomas.

Walker’s fun days are now replaced with dog days. His NBA career is on life support.

Is this the end of the road?