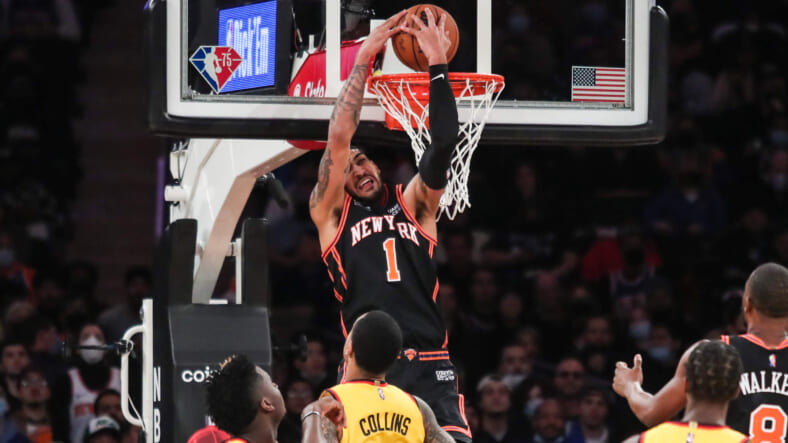 The New York Knicks needed a win, but just not any win, a victory over a good team that built momentum for the future. Despite not having Trae Young on Christmas day, the Atlanta Hawks tried their best to keep up with a Knicks team that gained back several players from the Covid health and safety list this week.

Head coach Tom Thibodeau shook up the starting five once again, injecting RJ Barrett in and relegating Alec Burks to the bench in a reserve role. The starting team played brilliantly, holding Atlanta to just 87 points after giving up 124 to the Washington Wizards on Thursday night.

Several individual performances stood out the most, especially Julius Randle’s 25 points, 12 rebounds, and 6 of 9 shooting from three-point range. He connected on 9 of 15 shots from the field and earned a +21 +/-.

The resurrection of Kemba Walker was perfectly timed for a Christmas miracle, as he posted a triple-double against Atlanta, showcasing once again, he’s back.

Walker scored 10 points, recorded 10 rebounds, and 12 assists on the day, helping push New York to another victory since his return from the bench. It seems as if Thibodeau may have no choice but to continue utilizing Walker with Derrick Rose out for a minimum of eight weeks after undergoing surgery on his right ankle this past week.

A rejuvenated team shot 40% from three-point range and 44.7% from the field. They hit just 41.7% from free throws but posted 50 total rebounds and 28 assists. A few under-the-radar performances came from Obi Toppin, who contributed 13 points and an electrifying between the legs dunk with the game winding to an end, and rookie Quentin Grimes, who scored 15 points, recorded two steals, two assists, and shot 5 of 12 and three point range.

Before Grimes was knocked out due to a positive Covid test, he recorded a season-high 27 points against the Milwaukee Bucks on December 12. He has two consecutive games with double-digit points, scratching his way into a more prominent role and posting 25 minutes of play.

Finally, earning a win at home was a big development for the Knicks, and they will look ahead to Tuesday night against the Minnesota Timberwolves, who host the same record as Atlanta. They have won four of their last six games but have dropped their last two against the Mavericks and Jazz. However, Timberwolves guard De’Angelo Russell entered the NBA’s health and safety protocols on Saturday, so he will be unable to feature against the Knicks on Tuesday.