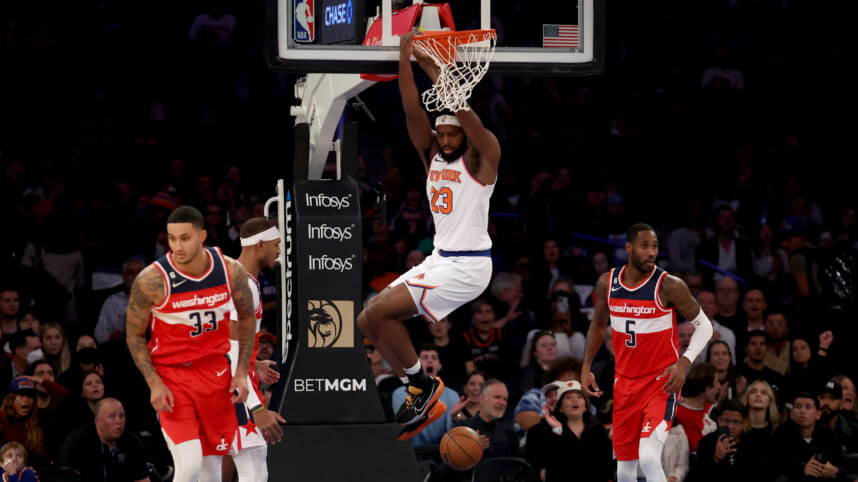 Robinson is showing he’s got what it takes.

Last season’s second-best offensive rebounder, Robinson put up a monster effort on the glass to fuel the Knicks’ 105-89 win against the Washington Wizards Friday night at Madison Square Garden to wrap up their preseason with a 3-1 record.

“That’s my goal [to become the league’s best offensive rebounder]. I have to keep working on it.”

“[Robinson] put a lot of work and he’s gotten better. The rebounding, the shot blocking, you get more comfortable with the ball, the finishing, the pressure on the rim that sets the tone from the start.”

The Knicks did not shoot well from the outside (8 of 33), but it didn’t matter as they were plus-26 on rebounds and outscored the Wizards, 58-34, inside the paint.

It wasn’t just a Robinson show as the rest of the starters continued their beautiful chemistry.

Jalen Brunson finished with a game-high 27 points and five assists. He bounced back after two subpar shooting with a 9 of 13 outing against Washington.

RJ Barrett also delivered another strong effort with a double-double (19 points, 12 rebounds). Julius Randle did not shoot well from the floor (3 of 11) but made up for it with four assists, six rebounds and two steals. Evan Fournier missed all of his three three-point attempts but contributed five assists and five rebounds that went with his quiet four points.

“I think you’re seeing the impact that Jalen (Brunson) has had on our team and particularly with the starters. Those guys are playing really well together. Very unselfishly, all of them.

Meanwhile, Quentin Grimes was rusty in his preseason debut, firing blanks after missing most of the training camp and the Knicks’ first three preseason games. But he finished the game with the rest of the starters before they were pulled out for good with 1:51 left.

Robinson said they took the game seriously with just five days before they open the season in Memphis. And it showed in the way they trounced the Wizards, who rested former Knick Kristaps Porzingis. It was a solid warmup game for Robinson in preparation for his matchup with Adams.

Next Wednesday night, Robinson will have the chance to prove his coach right.