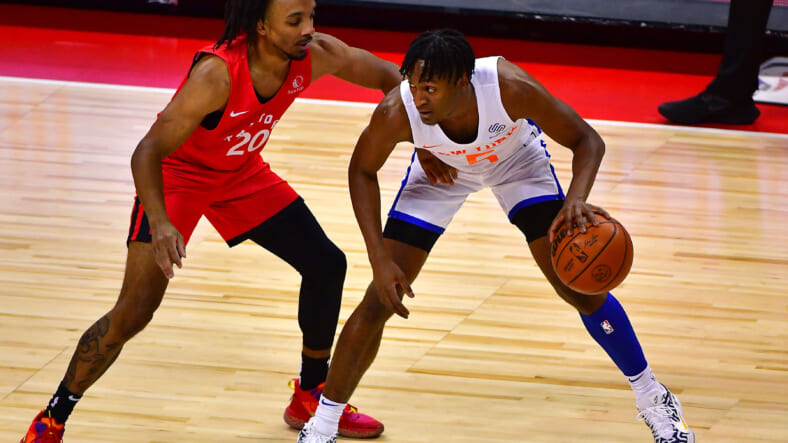 Through two games in the NBA Summer League thus far, the New York Knicks have given Immanuel Quickley the ability to shine as a point guard. He may have not had the best outing in their first contest, but he turned it around with an impressive performance against the Pacers on Tuesday with 32 points and 8 assists. Just take a look at some of these highlights:

Immanuel Quickley drops 32 PTS and 8 AST to lead the @nyknicks to the #NBASummer win in Las Vegas! pic.twitter.com/THXE64GJjX

What he’s proven in these two games is that he thrives as the primary ballhandler on the court, and most certainly equips the playmaking skills necessary to play the 1 in the NBA.Â  However, it’s simply not the capacity in which the Knicks will need him the most this upcoming season.

Looking at the Knicks Roster

If Immanuel Quickley was to be listed as a point guard for 2021-2022, he’d be the 3rd option, behind Kemba Walker and Derrick Rose. The Knicks would also need to move on from Luca Vildoza, who has a non-guaranteed contract.

As of right now, the most likely role for the 22-year-old from Kentucky would be the backup SG with Evan Fournier starting. This would ensure him the most playing time, and the opportunity to fill in for either Rose or Walker if they were to get injured.

This is probably the most ideal situation for Quickley going forward. No matter how good he is at facilitating and handling the ball, he most naturally fits into the role of shooting guard. Keeping him at his regular position while occasionally giving him reps at PG will allow him to continue to grow as a valuable combo guard.

As we saw all last season, Quickley is most effective when he’s shooting the ball well. This allows him to penetrate more efficiently and thus collapse the defense and find the open man or rise up for his patented floater. All this was evident in the first two summer league games for the Knicks.

Against the Pacers Tuesday, Quickley played with fearlessness and aggressiveness that came from increased confidence in his shot. Once he saw the ball go in a few times, he began attacking the rim, which forced defenders to commit. This not only gave players on the Knicks wide-open looks, but it also got him to the free-throw line, where he went 6-6. After the game, he displayed a heightened sense of maturity when discussing his role at the Summer League.

“I’ve been around a year… I’ve been in playoff games. Just continuing to spread my knowledge to the new guys, the young guys. Obi and I are doing a great job understanding we have to help these guys and communicate.” – Immanuel Quickley via NYPost

Quickley seems to be a player who understands what he needs to do to help the team win. No matter what it is you ask of him, he performs to the best of his abilities. As for this upcoming season, he will understand that the best way to help the Knicks will be at the shooting guard position. From a long-term perspective, Quickley could be the team’s solution at PG after Rose and Walkers’ contracts expire in two years. Rose is on a three-year deal, but the final season is not guaranteed.