Knicks: Tom Thibodeau explains why he pulled the plug on Kemba Walker experiment 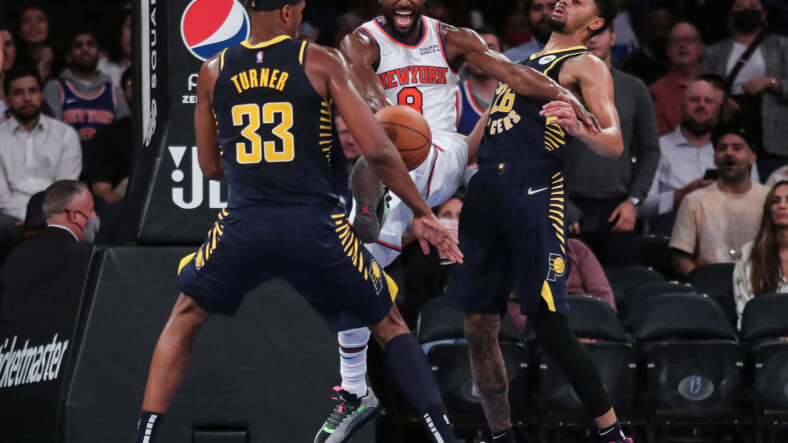 In a stunning development, New York coach Tom Thibodeau pulled the plug on the Walker experiment two nights after the Knicks put together one of their best defensive efforts this season in Atlanta without their erstwhile starting point guard. Walker rested on the second night of a back-to-back schedule, the second time it happened this season.

Burks was an instant hit in his first start this season. He gave a jolt to the starting lineup that has been floundering more than often in a roller-coaster start.

The bigger Burks, a 6-5 versatile guard with a 6-10 wingspan, dropped a season-high 23 points and collected seven rebounds, three assists, and two steals against only three turnovers in 39 minutes.

More importantly, Burks’ comfort level playing either on or off the ball has created synergy with the rest of the starters.

RJ Barrett broke out of his 10-game slump with 15 points on 6 of 11 shots. Evan Fournier waxed hot with 20 points on an efficient 7 of 13 shooting and 4 for 6 from downtown. Though he missed some good looks in the early goings, Julius Randle looked more comfortable on the floor after adjusting in the second half.

Thibodeau was effusive in his praise after the Knicks’ impressive win over Hawks and hinted at a permanent starting role for Burks.

“What Alec gives us is size and his ability to contain the ball and also his playmaking ability and shooting. When you add all that up, it adds a lot,” Thibodeau said after the Knicks held the Hawks to a season-low 90 points on 35.5 percent shooting.

On Monday, Thibodeau once again drilled that concept as the primary consideration to his decision.

“The size is the big thing. He makes us bigger,” Thibodeau said.

With the 6-foot-1 Walker as the starter, the Knicks have been outscored by a staggering 122 points, the worst plus-minus by any player on a winning team. He’s averaging 11.7 points, 2.6 rebounds, and 3.1 assists in 24.5 minutes, all career-lows.

Thibodeau sounded like he had been contemplating this decision, with the Knicks’ win against the Hawks serving as the last straw.

“I want to tighten up the rotation. I like the way the team functions so it will be similar to what we did in the Atlanta game,” he explained. “It’s a tough decision to make but you always have to do what you think is best for the team.”

Perhaps this stunning decision to drop Kemba Walker out of rotation is another proof that Thibodeau is evolving and has learned from his past mistakes. Last year, he was stubborn about keeping Elfrid Payton as a starter until the playoffs rear its ugly head. Now, he’s dropping the dead weight that has been keeping the team from taking off.

Thibodeau said he’d told Walker of the tough decision he made.

“I view Kemba as a starter. It will be tough to play three small guards together. I give it consideration. And I’ve got great respect for who Kemba is as a person, No. 1, and all that he’s accomplished in this league. But I have to do what is best for the team.”

Burks was previously part of a three-guard lineup in the second unit alongside Derrick Rose and Immanuel Quickley. With Walker dropped from the rotation, rookie Quentin Grimes, who played a season-high 14 minutes in Atlanta, has an opportunity to carve a meaningful role with the second group.

As for Walker’s future, it is unclear if he will seek a buyout or if the Knicks plan to deal him to another team.

Burks will start on his new role against the Brooklyn Nets on Tuesday night.