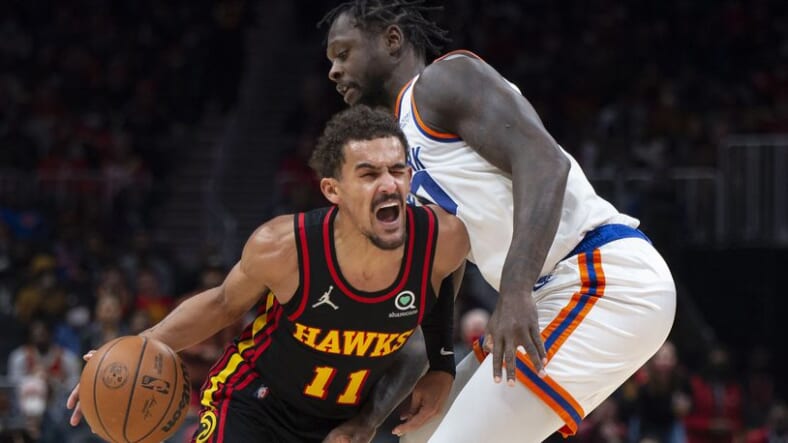 The Atlanta Hawks loaded up on New York Knicks star Julius Randle again in their first meeting since their stirring win in last season’s playoffs. But this time, Randle knew better.

His line for the night — eight points on 3 of 14 shots, 11 rebounds, eight coming off the defensive glass, and four assists — didn’t tell the whole story.

Randle had his second straight single-digit scoring. But unlike last year’s first-round exit and last Saturday’s ugly loss to the Phoenix Suns, Randle did a lot of other stuff to impact winning.

Randle crashed the boards, set up good screens, played solid defense on switches, and made good decisions, especially in the second half when the Hawks threw double teams on him.

“When you’re that type of player, you’re going to command a lot of attention and I thought he made a lot of good plays for us. If a team overloads on you, you have to understand that there’s an advantage on the weak side. So we got to trust the pass. I thought he made a number of really good plays,” New York coach Tom Thibodeau said.

Randle could have ended up with more assists, but his teammates missed a chunk of the shots he generated. According to NBA.com’s tracking stats, Randle made 39 passes, 18 leading to a shot attempt. Alec Burks and Evan Fournier combined to shoot only 3 of 12 off Randle’s passes while Immanuel Quickley missed both.

Really liked Julius' decision-making for the most part last night. Here's a mid-post iso and Capela shades over as he did in the playoffs. Julius drives middle though and Trae drops to the corner rotating too soon, opening up the 3 for Fournier pic.twitter.com/bEfEhwOsR1

RJ Barrett made 2 of 3, but only this shot was credited to Randle as an assist.

Knicks did a good job of getting out in transition. Loved this fastbreak. Not a single dribble is taken and it takes just two passes to get this look. The pass from Julius is perfectly placed pic.twitter.com/T2RJCvfGAV

Randle was at his best in the third quarter. He complemented Burks’ 15-point explosion with six points on 3 of 6 shooting, grabbed four boards, and issued two assists, including a nifty pass to Jericho Sims. The Knicks avoided the dreaded third quarter of doom and outscored the Hawks, 34-24.

Here's the value of having a big who runs the floor. Knicks have a 4-on-3 fast break. RJ and Evan space and Collins has to pick up the ball. This leaves Sims on for the dunk. Nice patience from Julius pic.twitter.com/QCM4mBFzBY

“I think when you play like that, everyone gets into a rhythm. It’s the right way to play,” Thibodeau said.

With Kemba Walker resting and Derrick Rose still nursing an ankle sprain, Randle returned to his last season’s role as a point forward alongside Burks in the starting lineup.

Burks, who is comfortable either on or off the ball, thrived, and it created more synergy in the starting lineup as both RJ Barrett and Fournier also got going offensively.

Burks had a season-high 23 points on 17 shots, seven rebounds, and three assists in his first start this season. Fournier added 20 points on 7 of 13 shooting while Barrett broke out of a 10-game slump with 15 points on 6 of 11 shooting.

“With Julius, even if he’s not scoring a lot, he’s doing so much out there,” Barrett said. “Just having him out there draws the attention of the whole defense. They got to focus on it and make it easier for all of us to play. So when we’re playing like that, hopefully, we can get him some easy buckets as well.”

Burks made 12 passes to Randle, which led to three attempts at the basket. But Randle missed all of them while he only made 1 of 5 off Barrett’s passes.

Despite the Hawks loading up on him, Randle still got some good looks at the basket that didn’t go in.

Four of his nine misses were wide open, with the closest defender from 4 to 6 feet away, according to NBA.com tracking stats. He was 2 for 7 on tight shots or with a defender 2 to 4 feet away and made 1 of 3 very tight shots (the defender is 0-2 feet away).

All three of his made field goals came within 10 feet from the basket. He was 0 for 3 from catch and shoot and missed all four pullups.

But even when his shots were not falling, Randle made his presence felt in a big way. The win in Atlanta showed how deep the Knicks are. But more than that, it also showed that Randle could thrive in a different role.

Forget about being LeBron James lite. A Draymond Green-type of role in a team loaded with gunners is better-suited for Randle. He can set the tone defensively with his versatility, especially on switches, and still be the offensive engine that keeps the Knicks chugging forward with his vision.