Knicks struggle to contain 3-pointers in shelling against the Cavs 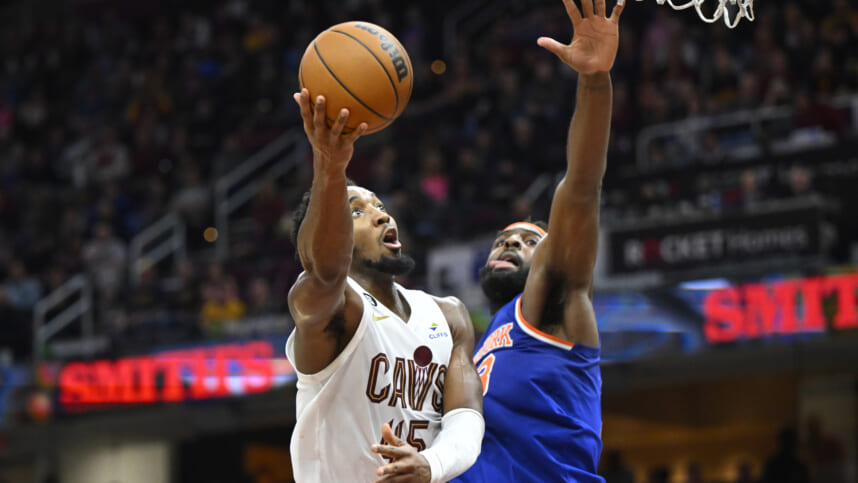 The New York Knicks suffered their second consecutive loss on Sunday night, losing 121-108 to the Cleveland Cavaliers. The story of the game was the Knicks’ problems with containing 3-point shots from Cleveland. The Cavaliers shot a barrage of long-distance shots against the Knicks, making a staggering 23 threes.

All but one of those 23 made three-pointers came from Donovan Mitchell (8 3PM), Kevin Love (8 3PM), and Dean Wade (6 3PM). The Knicks seemed to be in disarray defensively from the beginning, allowing Donovan Mitchell to knock down five 3-pointers in just the 1st quarter.

For most of the game, the Knicks seemed to not close out on open shooters very well, oftentimes having miscommunications on screens and cases of ball watching by off-ball defenders. Donovan Mitchell was in complete command of the offense and took advantage of the Knicks’ lack of pressure on the perimeter.

“Obviously {Mitchell} is going to command a lot of attention, and he did. We didn’t close as hard as we needed to.”

Tom Thibodeau on the Knicks defense via MSG Network

The most notable part of the Knicks’ struggles was relinquishing a 9-point fourth-quarter lead and getting outscored 37-15 by the Cavaliers in the 4th. Obi Toppin particularly had a few defensive lapses in the 4th quarter, helping out on Mitchell’s drives to the basket but not cutting off passing lanes to open shooters on the kick out, which led to more 3-pointers being made for Cleveland.

Toppin also acknowledged Mitchell’s ability to pick apart a defense with the intense attention he draws and plans to use Sunday’s miscues as a learning experience for future games.

“We have to be in the gaps when {Donovan Mitchell} is driving the ball. We just do our part and he does his part. He made great reads and got it to his shooters. We just got to learn from it and not let it happen the next time.”

Obi Toppin on the attention Mitchell draws via MSG Network

Knicks were unable to keep up on the other end:

The Knicks’ offense from beyond the arc was lethargic on Sunday, making just ten 3-pointers all game long, including going 0-for-5 from 3 in the 4th quarter, compared to the Cavaliers’ strong 8-for-13 three-point showing in the final quarter.

Despite keeping up with the Cavaliers offense for the first three quarters, it all unraveled in eerily similar fashion to Friday’s loss against the Bucks, as a big run late in the game delivered the devastating blow for the Knicks.

The Knicks needed to keep their foot on the gas and build a larger lead to put the Cavaliers away, and they did not do that on Sunday.

“I liked the way we competed the first three quarters. I thought we did a lot of good things, but we have to understand the intensity of the fourth quarter. We have to do better, and we will.”

Tom Thibodeau on the 4th quarter via MSG Network

The Knicks’ next matchup is back home in Madison Square Garden against the crafty Atlanta Hawks on Wednesday, November 2nd. The Knicks will look to guard the perimeter better against the Hawks’ All-Star backcourt of Trae Young and Dejounte Murray and get a big bounce-back win to right the ship.