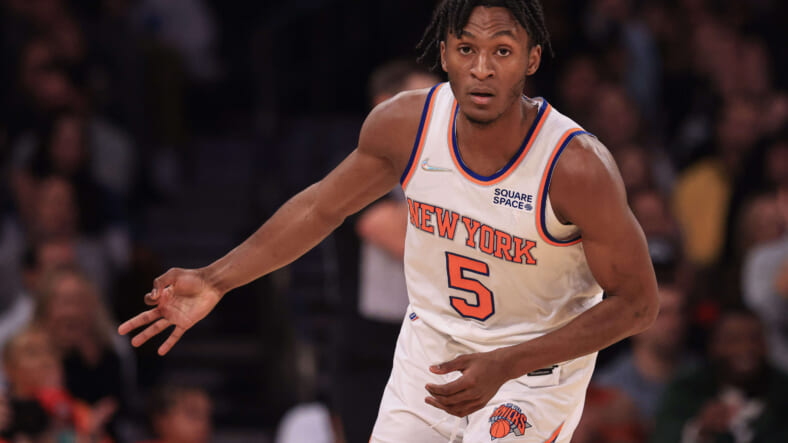 New York Knicks backup guard Immanuel Quickley’s shot has been fluky to start his third season in the NBA.

He’s only shooting 20 percent from the three-point zone, as he came up empty twice — 0-3 against Memphis and 0-4 against Orlando — in their first three games. But that did not stop him from making a positive impact on the Knicks’ 2-1 start.

“I learned a lot about that when I was in college at Kentucky, especially playing with other great players, especially in my school. Every night, it’s not always your night to score but you can still have a positive impact on the game. That’s something that I learned in college early on and then some night it is gonna be my night to score and when it is I take full advantage of that. But I think that’s what makes our team really unique. We have a lot of guys that can do a lot of different things.”

Quickley is used to playing with two other ball handlers — Tyrese Maxey and Ashton Haggans — at Kentucky, which eased his transition to the NBA’s style of play.

It was Quickley’s night in the Knicks’ season home debut against Detroit as he scored 20 points on 8 of 14 shots to pace the team. Two nights later, his shot was not falling again. Instead of trying to force the issue, Quickley focused on making plays, dishing out a game-high eight assists. He played the whole fourth quarter ahead of Evan Fournier and Derrick Rose.

Quickley with the starters is tied for the third-most used lineup so far for the Knicks, yielding a 29.0 net rating over 12 minutes, per NBA.com’s tracking data. In contrast, the starting lineup with Fournier has a -5.3 net rating in 44 minutes.

Quickley’s defense has gotten better, which New York coach Tom Thibodeau called underrated. A big reason for that jump is the additional bulk. He showed up in the training camp at 192 lbs after coming to the league at 184 lbs three years ago.

“In my rookie year, I was getting screened by like 300-pound guys, so it was hard for me to get around, get back in front and square my man. But I feel like I’m able to do that a little bit better now.

With his defense improving, Quickley wants to keep his playmaking on par. He showed a glimpse of that potential toward the end of last season.

Quickley has racked up 15 assists against five turnovers in the Knicks’ two wins. His newfound strength also allowed him to grab 13 rebounds over that stretch. Not bad for a lean, 6-foot-3 guard.

Quickley’s shot may come and go, but he’s found ways to thrive that jive with Thibodeau’s oft-repeated phrase: “You can impact the game without shooting well.”