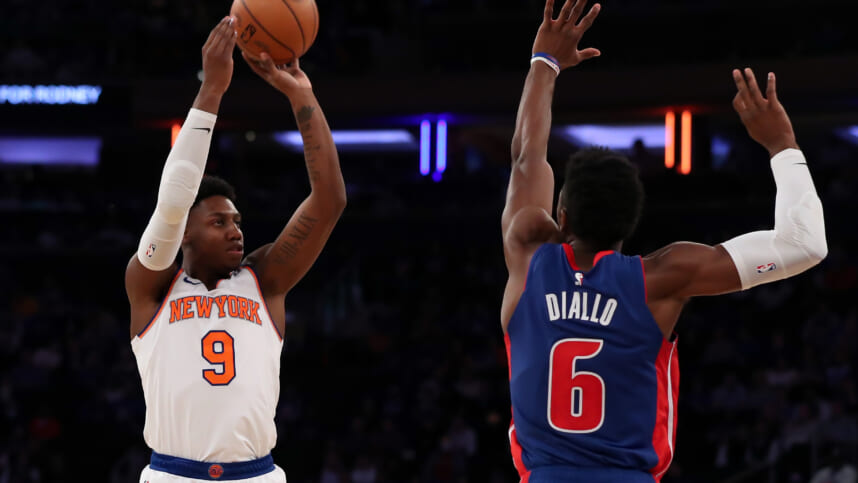 New York Knicks forward, RJ Barrett has finally started to regain his form beyond the arc after having a dreadful shooting slump to begin the season. Barrett is 5 for his last 10 from downtown after shooting just 4-for-28 from 3-point distance through the team’s first five games.

Knicks head coach Tom Thibodeau expressed confidence in the young wing after last week’s loss to the Milwaukee Bucks, stating that if he has the open shot, he should continue to take it, even if it is not falling.

“The more he does it, the better he’s going to be. A lot of confidence in him.”

After Barrett’s abysmal start from beyond the arc, many fans were worried about his long-term impact, as he had just signed a 4-year, $120 million extension in the offseason. Some fans are, in fact, still concerned about Barrett’s efficiency from a shooting standpoint, and reasonably so, as he is shooting an egregious 23.7% from 3-point range (16th worst in the NBA minimum 20 3PA) and only 40.7% from the field.

However, the slow but apparent resurgence from long range is a reason why those worries were premature such a short time into the season.

Through the first five games of the season, Barrett appeared to settle for lots of contested jumpers rather than finding the open look. In the past two games, he has had much better-shot IQ, taking the open shots off of the catch and shoot when given and creating his own shots with crafty sidestep moves.

Barrett himself is confident that as more shots accumulate, more will start to fall. He also says that he’s been putting in the work behind-the-scenes to find his rhythm day in and day out.

“I definitely could be playing better offensively and I feel my rhythm coming back after not playing for a while. But my rhythm [is] coming back slowly every game so I’ll be alright.”

RJ Barrett on his shooting rhythm via New York Post

Despite Barrett finding his shot of late, the Knicks as a team are still struggling from downtown. Overall, the Knicks are shooting just 32.8% from 3 overall this season, which ranks 7th worst in the NBA.

In their October 21st win over the Detroit Pistons, the Knicks shot a magnificent 42.1% from 3. Since then, the Knicks have dropped 3 of 5 games and are shooting just 32.5% from long range, including shooting just 27% from 3 in the Wednesday night loss against the Hawks, the second-worst showing from outside this season and their third game of shooting below 30% from 3.

The Knicks have been performing underwhelmingly at a time where they have a tough stretch of games against some of the Eastern Conference’s powerhouse teams. They will look to bounce back and end the drought against Joel Embiid and James Harden’s 76ers on Friday night in Philadelphia.