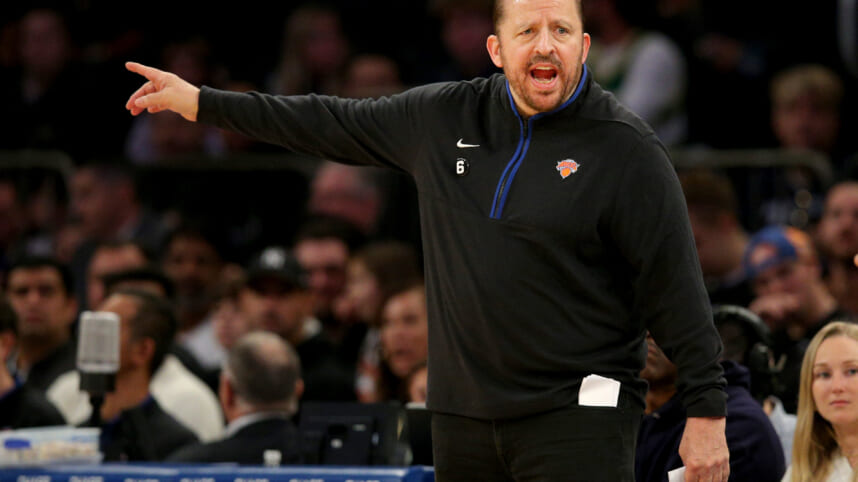 The New York Knicks are still searching for their superstar, and one NBA executive believes that New York’s surplus of picks will allow them to be in the hunt for some serious star power.

The Knicks have a total of nine draft picks in just the first round over the next five seasons. Given that the Knicks are past the full-on rebuild stage, the expectation is that New York will use the majority of those picks to acquire proven NBA stars.

“The Knicks are still trying to stockpile picks. That is what it is all about for them,” the exec told Heavy’s Sean Deveney. “They are approaching things like there will be a star who they can get—Shai Gilgeous-Alexander, Anthony Davis, (Kevin) Durant, Karl-Anthony Towns, someone—a star who comes on the market soon.”

NBA exec on the Knicks’ hunt for a superstar via Heavy

The Knicks have been craving for a superstar to play at The Mecca since Carmelo Anthony’s departure in 2017. With the available assets the organization possesses, this would serve as their best opportunity to land that superstar talent in several years.

The Knicks are in good shape to make some moves:

New York is in a relatively good position internally to be able to make a splash move or two. They are 8-9 on the season thus far, a mediocre mark that shows that the Knicks are not as far gone from being a contender than they were a few years ago.

The Jalen Brunson signing sent signals around the league that the Knicks are looking to build a contending franchise in the near future, which can happen much sooner by adding an available superstar.

Along with the aforementioned surplus of draft picks, New York also has some pieces internally whose role on the Knicks is uncertain.

Some names that stand out in that regard are Evan Fournier, Derrick Rose, and Immanuel Quickley. Rose and Fournier have seen massive role reductions this season, with the latter being removed from the rotation entirely. Both players are in the top 5 for the Knicks’ highest payrolls this season and given their change in roles, the Knicks will likely be looking to get off of those contracts to free up cap room to acquire a star with a large salary.

Quickley, on the other hand, is one of just two Knicks players in the rotation making below $5.3 million this season. Bringing in Brunson essentially took away any chance for Quickley to get a larger role than sixth man during his developing seasons on the Knicks.

He is only in his third year in the NBA but has regressed from a scoring standpoint this season. However, his impact in other areas may make him an attractive option from other teams, and a league executive believes that the Knicks can get a trade done at the right price.

“They want picks. If they can get two first-rounders for Quickley, they would but that is too high a price. Maybe a young guy or a prospect playing in Europe, someone like that, and a first-rounder, a protected first-rounder, that is probably where the market ends up on him.”

However, given that Quickley is a young, developing prospect, the Knicks have to really consider if trading him would provide more benefits than consequences. As previously mentioned, he is impactful in areas other than shooting, so the Knicks will have to do their due diligence when taking those phone calls for him.

The Knicks are locked-and-loaded to acquire a superstar to make the franchise a serious contender. they have the picks and the internal assets to do it, but only time will tell when they will pull the trigger.