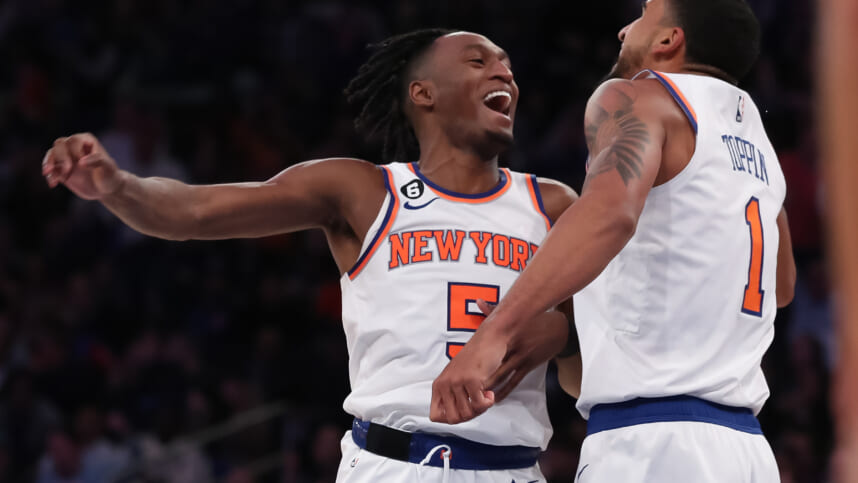 The New York Knicks have picked up the fourth-year options on Obi Toppin and Immanuel Quickley and the third-year option on Quentin Grimes.

The team made it official Wednesday, well advanced before the Oct. 31 deadline.

Toppin and Quickley have played vital roles in the Knicks’ 2-1 start as part of the fourth-best bench in the league in scoring (45.0) and net rating (11.3).

Quentin Grimes remains out with a sore left knee.

Toppin is currently averaging 9.3 points and 3.7 rebounds in 16 minutes off the bench, providing his usual energy and highlight reels. He owns the third-best net rating (9.0) in the team.

Quickley has shifted his focus to becoming more of a playmaker averaging 5.0 assists to go with 6.7 points and 5.3 rebounds. His defense has dramatically improved as he bulked up for his third year in the league.

The Knicks tried to keep all three off the table in their pursuit of Donovan Mitchell but were reportedly amenable to give either Toppin or Quickley in the nixed deal when the Utah Jazz pushed for the inclusion of Grimes.

Grimes was projected to battle incumbent Evan Fournier for the starting shooting guard spot after a stellar run in the NBA Summer League in Las Vegas. But the injury has kept him off the court since the training camp save for a 16-minute scoreless stint in the Knicks’ preseason finale.

Grimes averaged 6.0 points as a 38-percent three-point shooter in his rookie year. But on top of his remarkable marksmanship, his stout individual defense has endeared him to New York coach Tom Thibodeau.

In his place, Cam Reddish has flourished with the second unit. Another young player the Knicks picked up from Atlanta, Reddish did not get an extension, making him a restricted free agent after this season.

Reddish is averaging 11.7 points on a strong 55.6 percent shooting, including 44.4 percent from behind the arc, to go along with 3.7 rebounds and one steal in 20.3 minutes off the bench.