Knicks’ Obi Toppin is improving dramatically in one important category 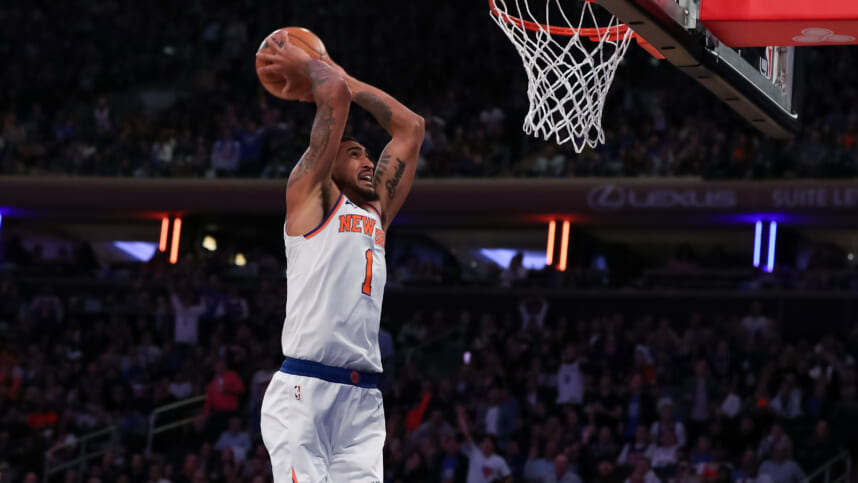 Despite playing behind Julius Randle, Knicks forward Obi Toppin is improving at an exceptionally fast rate, most notably from beyond the arc. In Friday night’s loss against the Bucks, Toppin shot 3 for 5 (60%) from 3-point range, increasing his season 3-point percentage through the first five games to 53%

On Wednesday, the Knicks picked up the former lottery pick’s 4th-year option. Despite getting limited action thus far, playing only about 15 minutes per game, Toppin is making the most of his opportunity to improve each game.

Toppin’s sophomore season got off to a dreadful start last year, shooting an abysmal 22.6% from 3 through his first 54 games. However, he really stepped it up after the All-Star break and has shot a staggering 46.6% from 3-point range in his last 15 games dating back to last season.

In almost an eye blink, Toppin has transformed himself into an all-around scoring threat, mixing dunk contest-style dunks in games with superb jump shooting.

According to his official NBA draft profile, Toppin’ strengths are his ability to get out in transition with explosiveness as well as score both inside and out.

During the aforementioned dreadful first half last season, the former Dayton product was rarely seeing the floor for long stretches, and Knicks head coach Tom Thibodeau would typically pull him from the game after a miscue on the court, a theme that was common during his rookie season as well. The lack of playing time, as well as the short leash, never allowed to Toppin to accumulate shot volume and get into a rhythm of sorts.

That changed when the Knicks were depleted on options, losing players such as RJ Barrett and Julius Randle to various injuries. Toppin started 10 games last season for the Knicks, including the final five games of the regular season, averaging 35 MPG in those 10 starts. The injuries to other Knicks players granted Toppin a longer leash, which allowed him to get more comfortable with playing on an NBA floor.

During that final five game stretch, Toppin went on a tear, averaging a gaudy 27.2 PPG and shooting a tremendous 46.3 % from 3-point range (19 for 41), including a career-high 42-point performance against the Raptors in the season finale.

He was shooting the ball with extreme efficiency and was letting it fly from long range with tons of confidence. He arguably had the best five game stretch of any Knicks player for the entire season, and his fellow Knicks teammates love seeing him succeed when given the opportunity.

“I’m happy to see {Obi Toppin} get out there and get his opportunity and capitalize on it.”

Strong finish last season has translated into a strong start this season:

Toppin’s absurd finish last season has transitioned over to sustained success so far this season. Despite his action on the court being limited to just 15.6 MPG through the first five games this season, he is getting the most of his opportunity, shooting 50% or above from the field in his last four games and averaging his highest shot volume from long range of his young career, attempting three three pointers per game.

With how effective he is becoming as a shooter from long range, he is developing into an all-around 3-level scoring threat. He is combining bursts of explosiveness underneath the rim with sniper shooting from distance. This development has got fans questioning head coach Thibodeau’s strategies, as Toppin has yet to see a significant increase in court time despite his recent success.

Toppin himself, on the other hand, is simply focused on improving whenever he is called onto the floor, regardless of how often he is called upon. In terms of shooting, Toppin’s mindset is focused on not dwelling on a missed shot and taking things one shot at a time while on the floor.

“If I miss, it’s next shot. And I’m gonna have that mentality for the rest of the year.”