Knicks: Obi Toppin gets his chance in Julius Randleâ€™s absence 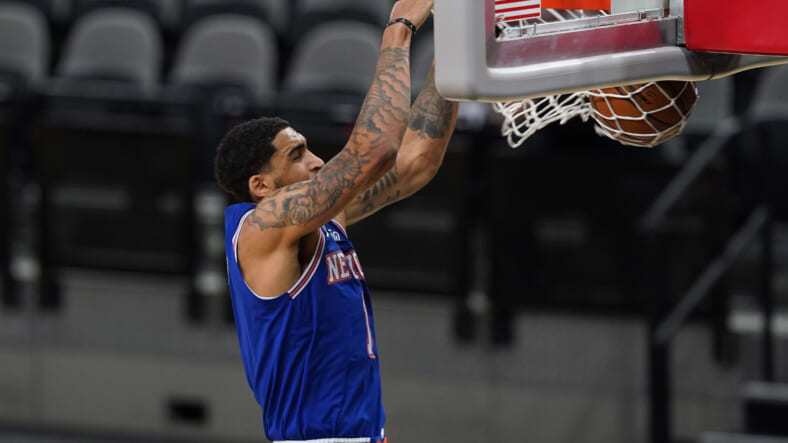 Obi Toppin will finally have his chance to show what he can do with an expanded role when the New York Knicks face the Washington Wizards Saturday night on the road.

Toppin is likely to start in place of All-Star Julius Randle, who skipped the trip to the nationâ€™s capital due to personal reasons.

Randle also missed Fridayâ€™s practice. Knicks coach Tom Thibodeau did not go into details but assured that â€œitâ€™s for a good reason.â€ Randleâ€™s wife, Kendra, is reportedly expecting to deliver their second child any time this weekend.

â€œWe have good quality depth, and I want to get a look at some of these guys,â€ Thibodeau said.

He was referring to Toppin and Kevin Knox, who will split Randleâ€™s minutes.

Toppin played with confidence and was fluid in the Knicksâ€™ impressive 125-104 win against the Indiana Pacers in their preseason opener. He was one of the seven Knicks players who scored in double figures with 10 points and five boards.

Thibodeau was effusive in his praise of Toppin, who is getting more comfortable with his role.

“Heâ€™s gotten a lot better,” Thibodeau said. “Heâ€™s put a lot of extra time in. But I think more than anything, itâ€™s probably the experience. I thought last year was difficult in some ways for him because of not really having the summer league, a fall, where you can grow into it. And heâ€™s one of those guys that with repetition, he gets a lot more confident.â€

Toppin was a late bloomer guy in high school before exploding in his last two years in college. After he looked lost early into his NBA rookie year, Toppin picked up steam in the second half of the season that crescendoed in the playoffs. He followed that up with a stellar Summer League stint.

“I think the game has slowed down a little bit,â€ Thibodeau said. â€œI like the way he played offensively. He wasnâ€™t rushing at all and made good decisions. And heâ€™s skilled.”

On the other hand, Knox is fighting to salvage his NBA career after falling off Thibodeauâ€™s rotation last season. The 2018 lottery pick is on the last year of his rookie contract. Saturdayâ€™s game gives him a shot at impressing Thibodeau after missing the NBA Summer League due to COVID-19.

Knox scored four points on two aggressive drives after missing a three-pointer in their win over Indiana. He added two rebounds in four minutes of garbage time.

â€œ[Thibodeau] really preaches if your shotâ€™s not going in or having a bad shooting day, what else can you bring to the team?â€™â€™ Knox said after Sundayâ€™s practice. â€œFor myself, using my length, using my height and my body to really focus on rebounding and defending on the other end. I really feel I can guard 1-to-4. Thatâ€™s what he really wants to see from me â€” locking in on that end.â€

â€œHe knows what I can do on the offensive end. He wants to see that defensive energy, the rebounding and really flying in transition and using my length all over the court.â€

Meanwhile, Nerlens Noel is back in the lineup after resting against the Pacers. Thibodeau earlier said that a key rotation player would likely rest in each of their four preseason games. This Saturday is Randleâ€™s turn.