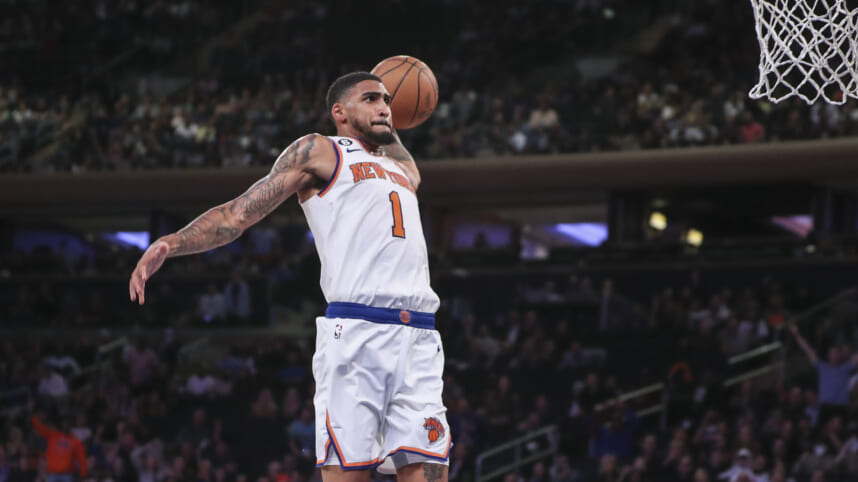 To say New York Knicks forward Obi Toppin is fun to watch is an understatement.

Toppin showed another glimpse of his potential — the locked-in and poppin’ Toppin we saw during the final stretch of last season — against Indiana last Wednesday night.

His five dunks were the loudest plays he made during his 24-point effort in the Knicks’ second-straight preseason blowout win. But his four three-pointers were the most important baskets he scored.

He was 0 for 4 against Detroit three nights earlier. But that did not stop him from pulling up from the outside. He missed his first three-point attempt badly to start the game against Indiana before finding his rhythm in the pivotal second quarter.

Toppin contributed 10 points — two of them from behind the arc — to the Knicks’ 46-point explosion in the second quarter. He shot with confidence. His first three-pointer was a pick-and-pop with Derrick Rose that cut the Pacers’ lead to one, 32-31, early in the second quarter. The second was more beautiful. A well-designed play off the inbound with Jericho Sims providing a screen for RJ Barrett that allowed Toppin to pop to the corner. Isaiah Jackson rushed to block the attempt but Toppin’s was unnerved.

After New York-based NBA trainer David Zenon helped Toppin with his three-point shooting form in the summer of last year, the hybrid forward polished it with the Knicks coaches this summer.

It’s the skill he hopes will turn him into a serious offensive threat in half-court sets.

Sure his dunks — including the Eastbay special toward the end of the third quarter — make him a fun player. But he wants to be taken seriously not just on the open floor.

“[Toppin] is a fun player, man. That’s one guy you come to watch. He’s really fun out there. I still don’t understand how he gets those leak-out dunks every second. He really does run the floor and he’s making his shots now. Going into year three, he looks so much more poised. He’s really been working on this game so I know.”

His highlight of the night — the Eastbay special — came after he chased Kendall Brown’s three-point attempt from the free throw line. His defensive gem led to a special moment.

“I’ve worked hard on my defense this year guarding different positions not only fours and fives but being able to [defend] guards as well. I’m gonna continue working on that and get embedded throughout the season.”

Toppin led six Knicks players in double figures with 24 as Tom Thibodeau let the starters rest for most of the second half.

“Oh, it just shows that everybody on the team can score. We just got to do little things to help us win. Whether that’s rebounding hustle plays diving on the floor. We know everybody can score on our team, but it’s the little things that are gonna bring us to the next level.”

Those hustle plays and his confidence in his outside shot will help Toppin get his game to the next level. It will also endear him to Thibodeau, who has been reluctant to play Toppin and Julius Randle together, which hampers the third-year forward’s playing time.

But Toppin’s effort against Indiana was well received by Thibodeau.

“He brings life into everything he does. He walks into the building and there is a bounce to him. He energizes the team, and you can feed off that but when he is playing defense and getting out and we can play fast…. everything is fast with him. Defensively, he’s working hard at it. There’s still a ways to go but he’s made great strides.”

Toppin as a fun player has been overstated.

Yes, he’s a ball of energy. He can rock the Garden with his electrifying dunks. But his ability to hit the outside shot and become a reliable, versatile defender is the swing skill that will be key to his success going into his third season.