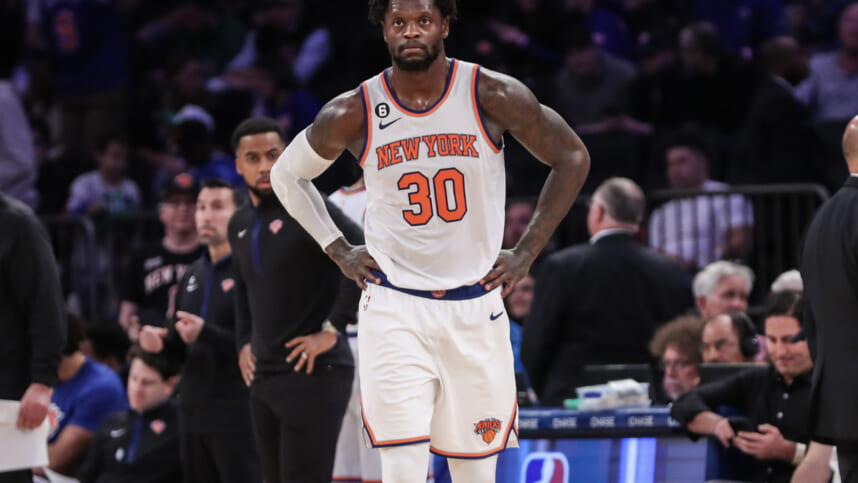 The New York Knicks ended up on the wrong side of history Saturday night, as they surrendered a staggering 27 three-pointers to the Boston Celtics in their 133-118 loss at Madison Square Garden. The Celtics shot a stupendous 52.9% from long range, and their 27 made 3s set a new franchise record for most 3PM in a single game.

The Knicks have now lost 4 of their last five games after starting the season 3-1, and have given up 20+ makes from long distance to their opponent twice during that stretch, with the other being a shelling of 23 threes given up against the red hot Cleveland Cavaliers, a game in which 3 Cavalier players made at least six 3-pointers.

The Knicks can’t contain the 3

Every player who stepped onto the court for the Celtics made at least one 3-pointer on Saturday vs. the Knicks, and six Celtics players hit multiple threes. Over the Knicks’ last four games, they have allowed opponents to shoot 41.2% from 3, which is the 2nd worst rank in the NBA in that span.

Teams are also attempting lots of threes against the Knicks, as in their last five games, they have allowed the most 3-point attempts by opposing teams in the NBA with 227 opponent 3PA in that stretch. Overall, they have allowed the 2nd most 3PA to their opponents this season at 379, with only the Minnesota Timberwolves allowing more attempts.

New York has had major problems with switching on screens, picking up open shooters, and contesting 3-point shots of late, all with which were huge factors into their loss on Saturday.

Knicks guard Jalen Brunson, who scored 22 points and had 10 assists in the loss against the Celtics, attributed the defensive struggles to poor communication and also held himself accountable for his own mishaps on the defensive end.

Jalen Brunson on what can be improved on defensively via SNY

“There are some [3-point shots] I thought we could have challenged better. Some we did challenge better [but] they made. “

The Knicks’ silver lining is the improvement of some players:

Despite the Knicks struggling defensively, some players have begun to step it up offensively. On Saturday, the Knicks shot 40.7% from 3, their second-highest mark through the team’s first nine games this season, which was a stark contrast to the Knicks’ abysmal long-distance shooting the previous two games. After getting off to a slow start, RJ Barrett is averaging 20/5/3 while shooting 36.7% from 3 over his last five games.

Despite having an off night on Saturday, Obi Toppin is averaging 11.2 PPG while shooting 40% from 3 over his last five games. He hit the go-ahead 3-point basket Friday night against the Philadelphia 76ers, which ultimately propelled New York to a victory.

Fixing the defense is key for the Knicks:

If there is anything for Knicks fans to be encouraged about, it is that the young players are developing at an exceptionally fast rate, and the Knicks as a team have done a better job at keeping up with opposing offenses of late, as they are usually within striking distance for a majority of the game.

However, they are still allowing opposing teams to get way too many open looks from beyond the arc, which is costing the Knicks games they could be winning with their high-powered offense. Cleaning up the perimeter defense is the one major flaw that has to be addressed sooner rather than later if they expect to turn things around.

The Knicks will try to tighten up their perimeter defense when they take on the Timberwolves in Minnesota on Monday. The Timberwolves are shooting 33.1% from 3 this season, a 0.1 percentage point above the Knicks.