Knicks News: Julius Randle is a man of the people, Derrick Rose’s presence is enough to attract stars 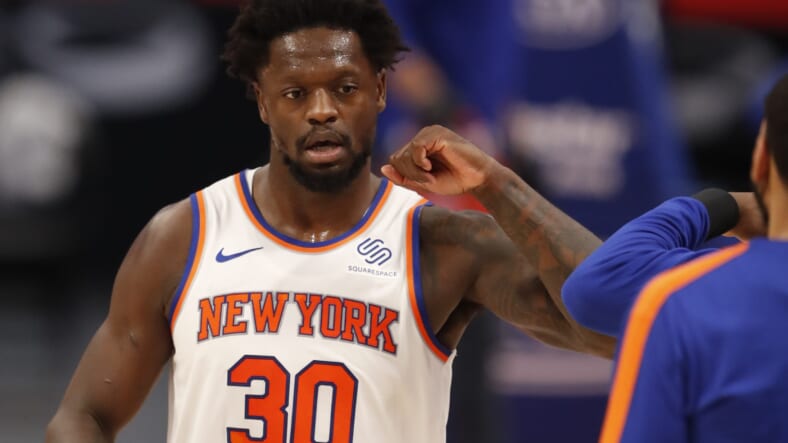 One of the more impressive accomplishments the New York Knicks have enjoyed the past two years is the building of a culture on the backs of great people. The first step in changing the course of the franchise was to alter their trajectory in the locker room regarding mentality and discipline.

Head coach Tom Thibodeau has done a phenomenal job implementing his style, which focuses on strict defense and practicing at 100%. He has no worries running a player into the ground with significant minutes, which some have questioned in the past, but ultimately brings out the best in those who embrace it.

The one player that saw his talents take a jump to the next level is now All-Star power forward Julius Randle, who signed a lucrative four-year extension this off-season to stick with the Knicks. When the extension kicks in after the 2021-22 season, Randle will earn about $30 million per year. The contract lands at $117 million, making him a free agent in 2026. The deal includes a player option during the 2025-26 campaign and a 15% trade bonus if the Knicks elect to part ways prematurely.

Interestingly, the two sides agreed on a deal well before the season began, electing to capitalize on his performance from last season instead of betting on himself and seeking a contract even more impressive in stature (Dennis Schroder set the stage for that mistake). The Knicks felt confident executing this contract mainly because of how Randle has reinvented himself, becoming a leader and face of the franchise.

Julius is not only a ferocious player on the court, but heâ€™s a man of the people off the screen. He spent his day off reading to children at his son’s school, setting an example for players on the team.

The culture the Knicks have built revolves around discipline and respect for one another. New acquisition Kemba Walker already indicated one of the main reasons he joined the team was because of Derrick Rose’s presence within the roster. Rose alone is capable of attracting big names, given his experience and wisdom at the point guard position.

Rose has already submitted the starting job to Walker, indicating he will help the team in any way he can, whether it be with the starting team or the reserves. With so many mentors to help curate a learning environment for the younger players like RJ Barrett, Immanuel Quickley, Obi Toppin, Quentin Grimes, and Miles McBride, the sky is the limit for this team. If they can remain positive and motivated, they might even be able to push beyond the first round of the postseason this upcoming year, which would really set the stage for a franchise that is headed toward a renaissance.