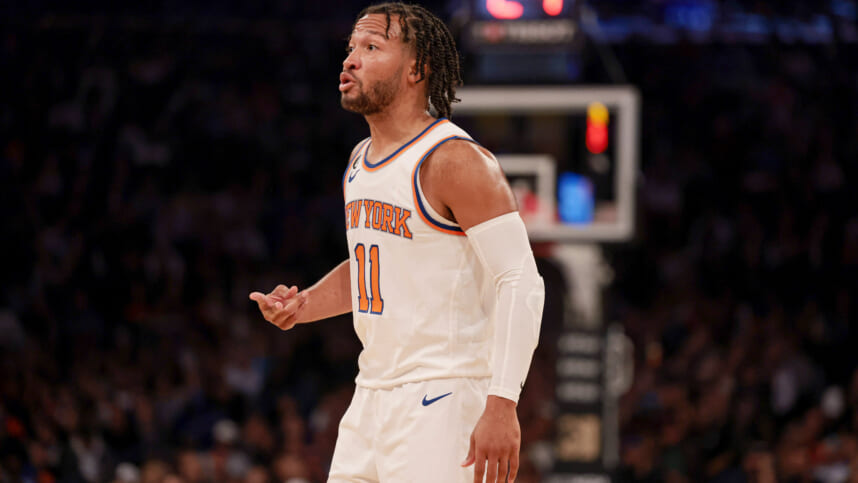 Jalen Brunson’s Knicks tenure has gotten off to a phenomenal start, averaging 18/4/7 while shooting a tremendous 38.1% from 3 through the team’s first five games.

Fans who were initially weary of the lucrative 4-year, $104 million contract given to the former Dallas Mavericks guard now feel pleased that the Knicks have a solid point guard for the first time in what has felt like an eternity.

However, in Friday night’s loss to the Bucks, Brunson was held to just 13 points and 2 assists, both season lows. Brunson held himself accountable for the lackluster performance on a night where nearly every Knick struggled to get good looks against the Bucks’ ferocious defense.

“I’ve got to do a better job with just coming out and attacking, being who I am. I take full {blame} for that. I’ve got to come out with the intensity and tenacity like I usually do.”

The Knicks lead 24-22 with 53 seconds left in the 1st quarter. After that, they never were able to regain the lead and at one point, trailed Milwaukee by 24 points. It was a stark contrast from the first few games, where the Knicks seemed to be flowing well offensively as soon as tip-off, as they average 28.6 PPG in the first quarter this season, a rate higher than the Suns, Grizzlies, Heat, and Nets to name a few. Brunson acknowledged how the Knicks were never able to get into a rhythm and keep up with the Bucks versatility on offense.

“We were just playing catch-up the whole game. If we start the way we usually start, I think it will be a different game.”

Jalen Brunson on their off night offensively via New York Post

The New York Knicks know what they need to correct:

Despite the Knicks off to a 3-2 start, Brunson knows there are mechanics he and the Knicks have to work on. Accountability for underwhelming performances is a key characteristic for young players to have, as it proves to the coaching staff that they are willing to put in the work to adjust and learn from their miscues.

The Knicks’ next game is against the Cleveland Cavaliers on Sunday, and Brunson will surely look to bounce back in a big way.