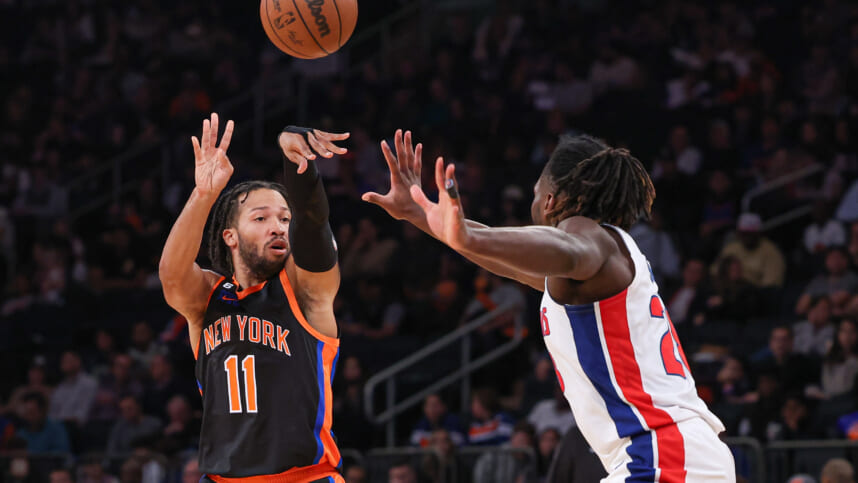 New York Knicks’ new point guard, Jalen Brunson, continued his marvelous inaugural season in the Big Apple with a stellar performance against the Utah Jazz in their 118-111 victory on Tuesday. Brunson scored 25 points (12 in the fourth quarter), dished out 8 assists, and collected 3 steals while shooting 50% from the field in the road victory, bumping his season averages to a superb 19/3/6 and 1.3 steals per game.

Brunson is currently averaging new career highs in PPG, APG, SPG, and FT% (an NBA’s 25th best 87.7% from the charity stripe), a trend that has followed him nearly every season in his young NBA career.

His latest performance adds to the collection of great games Brunson has played this season, proving many Knicks fans that he deserved every penny of his 4-year, $104 million contract he signed with New York in the offseason.

“We stuck together for four quarters,” Brunson said. “When they made a run, we just kind of looked at each other and said, ‘It’s time to tighten up.’ “

Jalen Brunson is among the better point guards in the NBA

Brunson is not only having his personal best season, but he is also having one of the better seasons among point guards in the NBA right now, which could lead him to his first career All-Star appearance.

Brunson’s 19.9 PPG is currently the 4th best among guards in the Eastern Conference (minimum 10 games played). His 49.3% FG% is tops among Eastern Conference guards who have played at least 20 MPG and 4th in the NBA, with only De’Aaron Fox, Steph Curry, and Luka Doncic shooting better from the field amongst all guards (minimum 20 MPG).

Brunson has entered some elite territory with his stellar play this season, and Knicks fans see the star potential he has and are glad to see he is apart of this year’s Knicks squad.

Jalen Brunson has been a leader for the Knicks:

Along with setting new personal highs, Brunson has also contributed to the Knicks’ success on offense this season. The Knicks as a team are averaging 114.9 PPG this season, a 7-point advantage from last season and a mark that ranks 11th best in the NBA this season.

Brunson has used his exceptional playmaking abilities to be a floor general on the court, creating for his own shots mostly in the paint and mid-range areas, as well as setting up his fellow teammates for open looks by drawing double teams and making the right read.

Brunson’s fellow Knicks teammates have displayed high praise for his contributions and have spoken highly about his leadership on the court. Cam Reddish gave Brunson his flowers after his 27-point, 13-assist performance against the Charlotte Hornets on October 26.

“He’s been unbelievable since he got here.” Reddish said. “[Brunson] gives everybody confidence. He’s been unbelievable. Obviously, he’s made some big shots, but I think it’s bigger than that. He’s a great leader, great person to be around, look forward to the rest of the season.”

Brunson will look to continue his phenomenal season tonight when the Knicks take on the Denver Nuggets for a Wednesday night road matchup. Nuggets’ star center and reigning MVP, Nikola Jokic, is out due to Health and Safety Protocols.