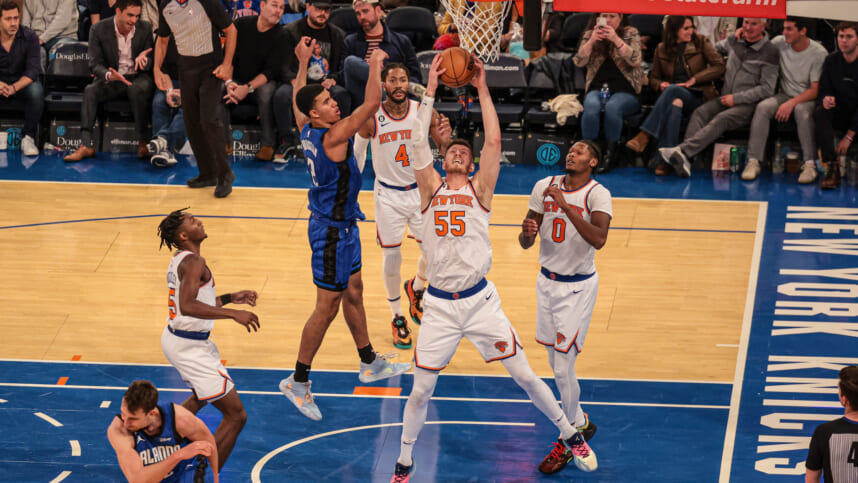 The New York Knicks are a little banged up after emerging with a 3-2 record in a brutal seven-day West Coast trip.

Thanksgiving Day gives them a much-needed respite before playing six of their next seven games at home starting Friday against the Damian Lillard-less Portland Trail Blazers.

Mitchell Robinson (knee soreness), Cam Reddish (sore groin), and Derrick Rose (toe) all participated in Wednesday’s practice, but in a limited capacity, New York coach Tom Thibodeau told reporters. Robinson and Rose, who participated in most drills, are likelier to play on Friday than Reddish.

Robinson returned Sunday and played back-to-back games after missing the Knicks’ last eight. But he exited in the first half of the team’s 129-119 win in Oklahoma City Monday night after experiencing soreness in his sprained right knee.

Meanwhile, Robinson’s chief backup Isaiah Hartenstein, who has struggled in their recent road trip, revealed that aside from playing with flu, he’s been dealing with an inflamed Achilles since summer.

Hartenstein started in four of the Knicks’ last five games but was limited to 3.8 points shooting under 40 percent and 5.6 rebounds in 18.5 minutes during the five-game road trip, a far cry from his season averages of 6.7 points on 52.6 percent shooting and 7.6 rebounds in 23.2 minutes.

“There’s nothing like crazy. It’s more inflamed a little bit so it’s just like I can play but I’m still just trying to get back to where I can move. I haven’t really been able to jump like I normally can. So it’s just doing a lot of stuff in training, making sure I don’t do too much of what I’m normally used to doing after practice. So it’s now just trying to regulate that and making sure I get back to work to fully play how I want to play.”

On top of that inflamed Achilles, Hartenstein is also adjusting to his new role, far from what he was accustomed to doing last season with the Los Angeles Clippers. With Hartenstein struggling, Jericho Sims took advantage and has now created a logjam at the center spot as Robinson works his way back.

“I know what I can do. It’s now just doing whatever I can do in the role that’s given to me. I have a lot of respect for Jericho and Mitch. So if that’s what coach [Thibodeau] thinks is the best thing to do – if coach thinks it’s best to go with Julius (Randle) and Obi (Toppin), then do that.

Depth has been one of the Knicks’ biggest strengths, but the logjam has led to some players finding it hard to get into a rhythm.

The logjams at the center spot and in the backcourt — with recently benched Evan Fournier, Immanuel Quickley and Derrick Rose as primary trade candidates — are bear watching as Dec. 15, when both Hartenstein and Sims are eligible to be traded, draws near. Robinson can’t be traded until Jan. 15 next year.