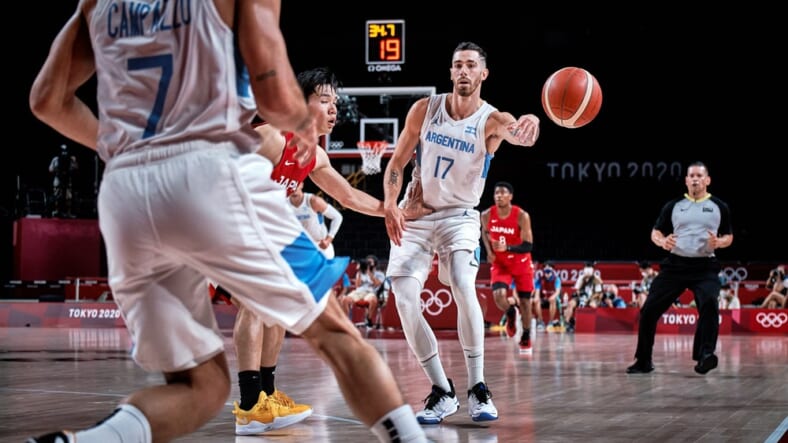 Luca Vildoza whips a pass during the Argentina-Japan game in the Tokyo Olympics. (FIBA photo)

The New York Knicks have to wait a little longer for Luca Vildoza after Argentina punched a ticket to the knockout round of the 2021 Tokyo Olympics.

Vildoza scored all of his seven points in the opening half, where Argentina established control en route to a 97-77 victory over host Japan Sunday (early Monday US time).

Knicks guard Luca Vildoza with a solid first half for Argentina in a must-win game vs. Japan.

The Japanese were able to cut the deficit to four in the early moments of the third quarter. But the Argentines answered with an 11-2 run for a 57-44 advantage, and they were never seriously threatened the rest of the way.

Vildoza added four assists, two rebounds, and a steal in 26 minutes off the bench. He was 2 for 3 in the first half but missed his next three shots in the final two quarters, all from behind the arc.

Argentina claimed one of the quarterfinals berths in the Olympics as the best third-placed team despite its 1-2 record. They had the best plus/minus (-6) among the three third placers in the group stage. Germany and the Czech Republic also finished with identical 1-2 records in their respective groups. But Germany had a superior plus/minus (-16) over Czech Republic (-49) to complete the quarterfinal cast.

France, Team USA, Slovenia, Spain, Australia, and Italy have earlier claimed their quarterfinal tickets as the top two teams in their respective groups.

The quarterfinals will be played on Tuesday, with the matchups to be drawn on Monday.

If Argentina wins on Tuesday, Vildoza will have to extend his stay in Tokyo until Saturday. The Knicks will open their NBA Summer League campaign on Sunday in Las Vegas.

If Argentina bows out in the quarterfinals, Vildoza can fly back to the US on Wednesday to rejoin the Knicks Summer League squad bannered by Immanuel Quickley, Obi Toppin, and their NBA Draft picks Quentin Grimes, Miles McBride, and Jericho Sims.

Vildoza signed a partially guaranteed four-year, $13.6 million deal last May and will have to impress the Knicks for a guaranteed spot next season.