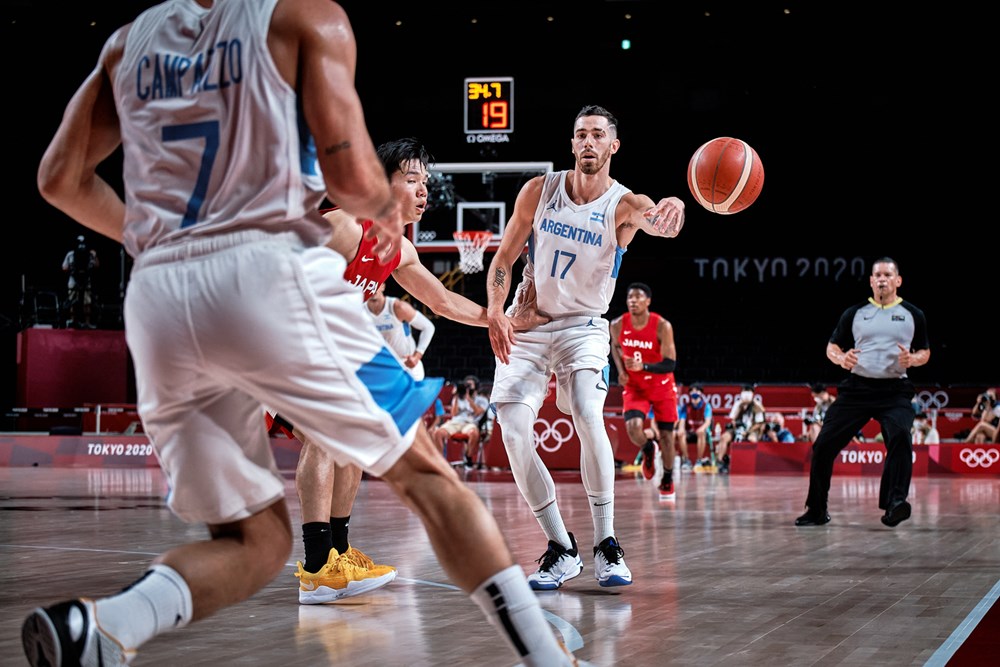 The New York Knicks have to wait a little longer for Luca Vildoza after Argentina punched a ticket to the knockout round of the 2021 Tokyo Olympics.

Vildoza scored all of his seven points in the opening half, where Argentina established control en route to a 97-77 victory over host Japan Sunday (early Monday US time).

Knicks guard Luca Vildoza with a solid first half for Argentina in a must-win game vs. Japan.

The Japanese were able to cut the deficit to four in the early moments of the third quarter. But the Argentines answered with an 11-2 run for a 57-44 advantage, and they were never seriously threatened the rest of the way.

Vildoza added four assists, two rebounds, and a steal in 26 minutes off the bench. He was 2 for 3 in the first half but missed his next three shots in the final two quarters, all from behind the arc.

Argentina claimed one of the quarterfinals berths in the Olympics as the best third-placed team despite its 1-2 record. They had the best plus/minus (-6) among the three third placers in the group stage. Germany and the Czech Republic also finished with identical 1-2 records in their respective groups. But Germany had a superior plus/minus (-16) over Czech Republic (-49) to complete the quarterfinal cast.

France, Team USA, Slovenia, Spain, Australia, and Italy have earlier claimed their quarterfinal tickets as the top two teams in their respective groups.

The quarterfinals will be played on Tuesday, with the matchups to be drawn on Monday.

If Argentina wins on Tuesday, Vildoza will have to extend his stay in Tokyo until Saturday. The Knicks will open their NBA Summer League campaign on Sunday in Las Vegas.

If Argentina bows out in the quarterfinals, Vildoza can fly back to the US on Wednesday to rejoin the Knicks Summer League squad bannered by Immanuel Quickley, Obi Toppin, and their NBA Draft picks Quentin Grimes, Miles McBride, and Jericho Sims.

Vildoza signed a partially guaranteed four-year, $13.6 million deal last May and will have to impress the Knicks for a guaranteed spot next season.

There was so much anticipation among the New York Knicks fan base.

Newly-signed guard Luca Vildoza arrived in the U.S. with much fanfare but will exit with a mixed bag of performance, including a sporadic electric game against Team USA.

Argentina got pummelled, 108-80, in their final pre-Olympics tuneup game Tuesday in Las Vegas, but the Knicks fans couldn’t care less about the final score.

All eyes were on Vildoza on how he measures up against elite NBA competition.

Vildoza came off the bench to spread nine points, all coming from beyond the arc, and he added three boards, two assists, one steal, and a block in his most complete performance in three exhibition games.

But there were moments when he looked overwhelmed.

Bam Adebayo blocked his shot. Draymond Green picked up his pocket. Kevin Durant shot over him.

But there were moments too when he looked he truly belonged, especially when he danced around Darius Garland before hitting a tough, in-your-face three-pointer.

Vildoza shot 3-of-8 from the field in 23 minutes. In three games, he shot 9-of-24 or just 37.5 percent from the field. Almost exclusively, his made baskets came behind the shorter FIBA three-point distance. He shot much better from that zone with a 42-percent (8-19) clip.

“I got to get better,’’ Vildoza told The New York Post during the postgame press conference. “I’m shooting too much 3’s without a reason, without thinking too much. I know I can get better on defense especially.”

Vildoza signed a partially guaranteed four-year, $13.6 million deal with the Knicks after averaging 10.1 points, 3.5 assists with Baskonia in the Euroleague last season while hitting 38 percent from long-distance.

“I’ve [been] doing this last two, three years in Europe and I know I can do it here,” said Vildoza. “Today was a test for me against the best players in the world. I felt really good against them, but we lost by 30, and I got to get better. I got work to do.’’

Vildoza and the world’s no. 4 Argentina have their work cut out for them. Except for the close call against Australia, they looked overmatched against Nigeria and Team USA.

“We played bad, we weren’t prepared for this game. They were switching everything. We are a pick and roll team and they defended that. It’s tough but we got time,” Vildoza said.

If they can’t pull their acts together, their chances are slim to play in the medal round. That will be bad news for Argentina. But good news to the Knicks as Vildoza can fly back to Las Vegas earlier to play in the NBA Summer League.

Argentina is grouped with host Japan led by NBA players Rui Hachimura and Yuta Watanabe, Luka Doncic’s Slovenia, and world’s no. 2 Spain. Vildoza and the Argentinians need to finish in the top two in their group to advance outright to the quarterfinals, or else, they hope they end up as one of the two best third-placers among the three groups to survive.

The quarterfinals will be played on August 3, while the semifinals and the gold medal match will take place on August 5 and 7. Meanwhile, the NBA Summer League will tip-off on August 8 in Las Vegas.

The Knicks are evaluating his performance this summer to guarantee his contract next season. Before he flew to Las Vegas for Argentina’s Olympic buildup, he spent time with the Knicks developmental coaching staff and met New York coach Tom Thibodeau.

Luca Vildoza talks about getting the chance to be a Knick and play under Tom Thibodeau pic.twitter.com/aDE5J2qw6j

“I’m really happy to be part of the historic team,’’ Vildoza said of the Knicks, who broke an eight-year playoff drought this season. “I’ve been saying this for the last two months. For me, it’s a dream since I was a child. I was dreaming of this day. When I got there, coach [Thibodeau] was there. I’ve been talking to him — one of the best coaches in the league. It’s so special. This is my chance to get here and get through to my dream.’’

An Olympic medal and a slot in the Knicks roster next season is his ultimate goal this summer. But there’s more work to do to get there.

New York Knicks‘ guard Luca Vildoza started for the second straight game for Argentina but hardly made an impact in a 94-71 loss to surging Nigeria in an exhibition game in Las Vegas, Nevada.

For the second straight game, Vildoza hit just 3-of-9 from the floor for eight points. He had 11 in a similar 3-of-9 shooting in Argentina’s 87-84 loss on Saturday.

Against Nigeria, Vildoza had his moments, especially in the third quarter. But the Nigerians, buoyed up by their historic upset win against Team USA over the weekend, were in total control since a big 13-2 run in the second quarter.

Vildoza, who trained with the Knicks’ developmental coaching staff for one month before joining Argentina’s pre-Olympic buildup, added two rebounds in 18 minutes. He also hit two of his five three-point attempts in 18 minutes of action.

In his first two games with Argentina since signing with the Knicks, Vildoza is averaging 9.5 points, 2.0 rebounds, and 1.0 assists in 18.5 minutes of play. He’s shooting 33.3 percent from the floor and 38.5 percent from deep.

Argentina will next play Team USA Tuesday at 6 p.m. E.T.

The Knicks signed Vildoza to a partially guaranteed four-year, $13.6 million deal before the NBA playoffs started. But he didn’t suit up as New York coach Tom Thibodeau referred to him as a “summer thing.”

The Knicks are closely monitoring Vildoza’s play with Argentina as part of their evaluation before picking up his $3.3 million option next season.

That could be a recurring highlight in August when the NBA Summer League makes its much-anticipated return.

Argentinian point guard Luca Vildoza and the duo of Immanuel Quickley and Toppin are expected to banner the Knicks in the NBA’s summer showcase that will feature the league’s draft picks and young prospects.

The 16th annual MGM Resorts NBA Summer League will take place Aug. 8-17 at the Thomas & Mack Center and Cox Pavilion on the campus of the University of Nevada, Las Vegas, the league announced on Wednesday.

All 30 teams will play five games apiece during the 10-day, 75-game event. After every team plays four games, the two teams with the best records from the first four games will meet in the finals on Aug. 17.

It will be Quickley and Toppin’s first NBA Summer League after the event was scrapped last year due to the pandemic. On the other hand, Vildoza will be fresh from his stint with the Argentina national team in the Summer Olympics in Tokyo which will run from July 23 to Aug. 8.

The Summer League will give Tom Thibodeau’s staff time to further evaluate the 25-year old Vildoza before they fully guarantee his 2021-22 salary by the start of next season.

“There’s a whole process that [Luca’s] going to have to go through so it’s going to be more of a summer thing. He’s got to go through a number of things to get cleared. That’s going to take time. We’ll take it step by step,” Thibodeau earlier said.

Unless they are moved in a package for a superstar, Quickley and Toppin are expected to play heavy minutes for the Knicks in the Summer League to fast-track their development.

The team’s draft picks will also be included in their Summer League roster. But the Knicks are not expected to have four rookies. New York Post’s Marc Berman earlier reported that the team is looking to bundle some, if not all, of their picks (Nos. 19 and 21, Nos. 32 and 58) to move up in the top-heavy Draft.

“Normally the Summer League is a dry run for training camp,” Thibodeau said back in December. “So it gives the guys an idea of what training camp looks like.”

Tickets for the NBA Summer League will go on sale on June 23 and the complete game and broadcast schedules will be announced at a later date.